Twintania (ツインタニア, Tsuintania?), also known as Twin Tania, is a recurring enemy in the series since its first appearance in Final Fantasy V. It appears as either a demon or dragon, depending on the game, and often as a late-game powerful boss. 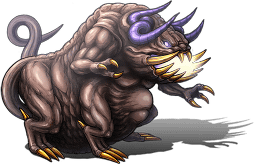 Twintania is fought as a boss at Interdimensional Rift at the Dimensional Castle rooftop, barring the path to the final floors of the game. It is one of the Demons of the Rift, and attacks with powerful attacks such as Atomic Rays, Snowstorm, Megaflare, Tidal Wave, and Mind Blast, and will charge up to unleash a devastating Gigaflare. It has a chance to drop the very rare Tinklebell in its non-charging form, and also has the very rare Titan's Axe as a common steal in its charging form, making it exceptionally difficult to get both rare items.

Twintania is fought as an enemy at Paramina Rift (Spine of the Icewyrm), being the only area where the player may find them. They are moderately powerful foes, favoring physical attacks and the Reflect spell. In the original version, it is possible to steal the Lohengrin, while in the International version, the rarest steal is the Platinum Sword.

For battle information, see The Binding Coil of Bahamut - Turn 5, or The Weapon's Refrain 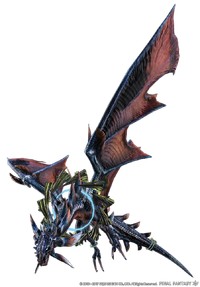 Twintania appears as a boss in

The Binding Coil of Bahamut - Turn 5 in A Realm Reborn, being the most challenging fight of the game until patch 2.2. In Stormblood, Twintania also appears as one of the bosses in

The Unending Coil of Bahamut (Ultimate).

Twintania also appears as a mount available for players through the "Recruit a Friend" campaign, and as a minion from the challenges at the Lord of Verminion game. The mount description states that it is an ancient Meracydian wyvern eternally submitted by an Allagan neurolink.

In Shadowbringers, the Tempest's elite FATE boss Archaeotania resembles the Twintania version from Final Fantasy V and Archaeotania's name is a portmanteau of Twintania and the name of it's more powerful palette swap Archaeodaemon. The achievement for defeating her alludes to their connection: "Another World, Another Turn". 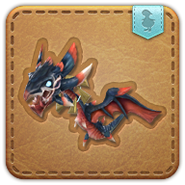 Twintania appears as a fire-elemental summon. It can be obtained through the summon drawing shop. The summon's appearance is based on the Twintania boss from Final Fantasy V.

The summon's special attack is Atomic Ray, which deals fire-elemental damage to all enemies. The summon costs two points to use from the consumption gauge. Twintania is an SS phantom stone and has a summon cost of 18 to equip to a character.

Twintania allows the wielder to use the following abilities: 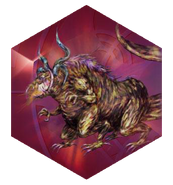 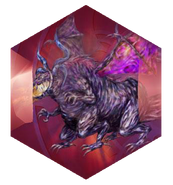 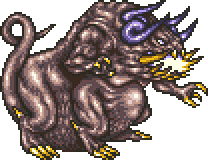 [view · edit · purge]"Twintania" is a portmanteau of the Greek name "Titania" and the prefix "twin". Titania is a character in William Shakespeare's play A Midsummer Night's Dream. The name "Titania" means "giant, great one", and is derived from Ovid's Metamorphoses, where it is an appellation given to Titan's daughters. In A Midsummer Night's Dream, Titania is the queen of the fairies.