Twincast (ふたりがけ, Futarigake?), also known as Twin, is an ability in Final Fantasy IV. Two characters with the Twincast ability can act in unison to cast powerful forms of magic. Twincast is used by Palom and Porom during normal gameplay, but is also used by Golbez and Fusoya in a cutscene. In the 3D remakes, any character can have Twincast as an Augment, and Tellah's Recall ability sometimes casts Twincast magic. Twincast resembles the Band system in the sequel.

The Twincast command's charge time varies depending on the spell the player selects to cast. When initiated, the twins cannot use other commands while preparing the spell. The spell is aborted if either of the twins is knocked out or petrified. Upon the spell executing, there is a 75% chance of using Pyroblast at a cost of 10 MP, or a 25% chance of using Comet for 20 MP. Comet has higher power and ignores Reflect, which Pyroblast does not.

In the GBA and Complete Collection releases of the 2D version of Final Fantasy IV, the Twincast ability can be upgraded on Palom and Porom. Equipping the Twin Stars enables the twin to cast Twin Meteor, which is much stronger than Comet and costs no MP, but takes a longer time to cast.

As it is possible through Augments for more than two people to have the Twincast ability, both casters must manually perform the command to execute the spell, whereas previously, if Palom or Porom alone used Twincast, the other twin automatically executed the command as well. 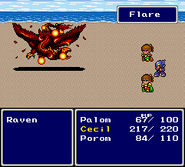 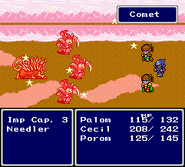 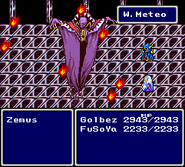 W.Meteo
Add a photo to this gallery

Double Meteor
Add a photo to this gallery

Ultima
Add a photo to this gallery

Twin Meteor
Add a photo to this gallery

This gallery is incomplete and requires Pyroblast, Comet, Twin Meteor, Bubble, Faith, Bravery and Ultima added. You can help the Final Fantasy Wiki by uploading images.

Ultima
Add a photo to this gallery

This gallery is incomplete and requires Twin Meteor, Bubble, Faith and Bravery added. You can help the Final Fantasy Wiki by uploading images.