Twin moons are the two moons orbiting the planet of Gaia in Final Fantasy IX. The original Gaian moon is blue, while the other, originating from Terra, is red.

The moons are not mentioned much in Final Fantasy IX, but the player can converse with people who talk about the moons in Daguerreo, and there is a Tetra Master card that depicts them.

Five millennia ago the planet of Terra attempted to assimilate Gaia to save its weakening crystal. The Fusion was a failure and the planets only partially merged with Terra shifting inside the planet of Gaia.

As a result of the failed Fusion, Terra's red moon moved on Gaia's orbit, giving the planet two moons. Each moon radiates the color of its planet's crystal, and as Gaia's crystal radiates blue light, and Terra's crystal radiates red light, the moons acquire their colors.

Explained in the Final Fantasy IX Ultimania[1], as the two moons orbit every sixteen days their positions switch, and the moons appear to overlap in a phenomenon similar to a solar eclipse. Only the Gaian moon's radiance is strong enough to be seen when it is directly behind Terra's moon. This is seen ( 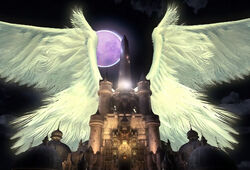 ) on the night Alexander is summoned. Because Terra's crystal is weak, the red moon doesn't glow as brightly, and when Gaia's moon covers Terra's, the red moon is left in shadow.

In an old development memo Hironobu Sakaguchi shared online, the play Tantalus Theater Troupe is about to perform at the beginning of the game is a "special play at night when two moons are full once a year".[2] In the final game, I Want to Be Your Canary is being performed to honor Princess Garnet's birthday.

The moons appear after the Alexandria stage transition with the Red Moon in front of the Blue Moon.

Ark's full-length summoning sequence shows it appearing from Terra's red moon. Ark itself seems to be some form of prototype airship of Terran design, seeing that it resides in Oeilvert that houses airship concepts.

At the end of the ending credits the two moons appear to merge and become one, seemingly transforming into the crystal that is the logo for Final Fantasy IX (

The Japanese translation for High Tide is roughly "Gain Spirit of the Full Moon" hinting at some deeper connection to the moons and the ability to enter Trance.

The moons appear on the background of a Yoshitaka Amano artwork.

Two moons in the "sky" in the stage production by Tantalus Theater Troupe.

Artwork of Zidane with the moons on the background for Puzzle & Dragon.
DFF2015 Alexandria Webphoto 4.jpg
The moons overlapping on a stage in the Dissidia Final Fantasy arcade version.
Add a photo to this gallery

The moons are not named beyond being the "twin moons", but they allude to Final Fantasy IV where the Earth has two moons, the Red Moon originally belonging to an alien race. [view · edit · purge]The Red Moon is the Indian name of the full moon seen during the month of August, the full moon's names were given in the Farmers' Almanac. The Moon may also appear red during a lunar eclipse.