When used by two people, the ultimate magic can be used.

The Twin Stars are accessories given to Palom and Porom upon successful completion of their trial in the Lunar Ruins. They provide +15 Defense, +20 Magic Defense, +10 Evasion, and +12 Magic Evasion, as well as adding Twin Meteor to the Twincast command list.

Twin Stars can only be equipped by Palom and Porom, and can be found within the Cave of Eblan. It has a defense of 15, magic defense of 20, evasion of 8, magic evasion of 12, and enables the spell Double Meteor when Twincast is chosen.

The Twin Stars is an armor that provides 4 Defense, 6 Magic Defense, -5% Evasion, and 6% Magic Evasion, as well as reducing MP use by half during battle. Can be traded in the tail collector's house on the True Moon, trade the Black Tail for the Twin Stars.

Reduces MP cost of one character to 0.

The Twin Stars is an item that reduces a player's MP cost for spells and skills when used in battle. Twenty can be used to customize Half MP Cost to a weapon. Twin Stars can be dropped or stolen from Nega Elemental, stolen from Behemoth King, or bribed from Spirit. Sixty can also be acquired from the Monster Arena after creating the Jumbo Flan.

The Twin Stars item reduces the MP cost of one party member to zero, allowing them to cast every spell without worry of MP deficiency. It can be dropped from Mega Tonberry (normal and Oversoul). 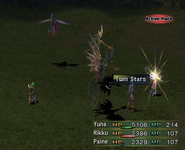 Twin stars or binary star is a star system consisting of two stars orbiting around their common barycenter.