Cid Pollendina: Oh, shut up and help me remodel the Tweigel page!
Please expand this article into a full one. The following tasks need to be completed: 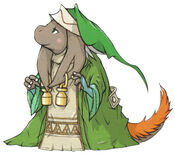 Tweigel is a non-player character in Final Fantasy Tactics A2: Grimoire of the Rift. He is a Nu Mou Illusionist and a member of House Bowen.

Tweigel is one of the three initial members of House Bowen, along with Bowen and Loa. He is the voice of reason within the group; while Bowen is hot-headed and Loa tactiturn, Tweigel usually puts up a front of caution. He is especially wary of Bowen's obsession with Klesta the Crushatrice and tries to find a way to prevent the bird from fleeing after every head-on battle.

When Luso comes into contact with House Bowen, he assists them in recruiting Veis and temporarily defeating Klesta. Tweigel beings to trust Luso and tells him about Bowen's wife, who died fighting the Crushatrice and sparked Bowen's incessant Klesta hunting. Tweigel asks Luso to bring a vial of Cloudy Sap during their next confrontation with Klesta; Luso does so only to find Bowen standing alone against the bird.

Thankfully, the rest of House Bowen shows up, and Tweigel commands Luso to put his plan into action; the Cloudy Sap successfully adheres Klesta to the ground, rendering its escape impossible. The swollen avian is finally destroyed, and Bowen can be at peace. He realizes how he had ignored Tweigel's pleas for patience and asks his group to forgive him. Accepting Bowen's apology, Tweigel also thanks Luso for his role in House Bowen's success.

Tweigel is both an ally and enemy in several missions. Regardless of his alliances, he uses roughly the same tactic in each battle. His Blood Price Support Ability directs HP to be drained instead of MP, which allows Tweigel to rely on the Wild Tornado Illusion skill without being hindered by a lack of MP.

This section about a character in Final Fantasy Tactics A2: Grimoire of the Rift is empty or needs to be expanded. You can help the Final Fantasy Wiki by expanding it.
Retrieved from "https://finalfantasy.fandom.com/wiki/Tweigel?oldid=805272"
Community content is available under CC-BY-SA unless otherwise noted.