The Turtle's Paradise sidequest is a sidequest in Final Fantasy VII. A bar named Turtle's Paradise in Wutai Village in has flyers posted all over the world. If the player reads all the flyers, and the notice outside the bar itself, and then talks to the person manning the bar in Wutai, they get a reward.

Close-ups of the flyers were included to the International version's special fourth disc that has a collection of various background items seen during the game.

The first flyer the player can find is in the Sector 5 Slum. In the southeast house, the player can go upstairs and find the flyer on the wall. If the player forgoes reading the flyer until after going to the Shinra Bldg., they must obtain the Key to Sector 5 from Bone Village after they have the Highwind to return.

The second flyer is on a notice board in the Shinra Bldg. lobby. There are two chances to read it. When the party raids the HQ to find Aeris, choosing to storm in to the first floor allows the party to find it. If the party chooses to sneak in quietly, there is a set of elevators at the top of the emergency stairs that can be used to ride down to the first floor to view the poster. If the player missed it, they can still visit the building optionally during the Raid on Midgar when on a quest to stop Professor Hojo from launching the Sister Ray. When the party is navigating the train tunnels, they can keep going up till they find the Shinra Bldg.

The third flyer is on a wall outside the item shop in Gold Saucer's Ghost Square. It can be read any time, although the park will be closed if Cloud is not in the party.

The fourth flyer is on a wall in Cosmo Canyon, Tiger Lily Weapons Shop. It can be read any time.

The fifth flyer is in Cosmo Canyon's inn just outside the room. It can be read any time.

The final flyer is in Yuffie's hideout in Wutai Village, downstairs pinned on a wall. The player can only visit the house as part of Yuffie's sidequest in Wutai, meaning the player needs to recruit her as a playable character and then visit the Wutai island to start the quest. After the quest the door to Yuffie's house remains open and the player can read the flyer at any time.

The reward for reading all the flyers and talking to the barkeep is a set of stat boost items and a Megalixir.

The dungeon in Don Corneo's cellar in Wall Market was at some point during development intended as a location for a Turtle's Paradise flyer. The data for a flyer discovered there is marked flyer #2, but the text is the same as for the flyer #3, found in Gold Saucer.[1] 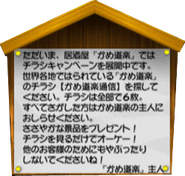