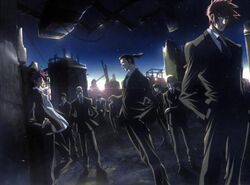 "Turks' Theme" (タークスのテーマ, Tākusu no Tēma?), also known as "Theme of Turks", is an original theme from Final Fantasy VII that became a recurring theme for the Compilation of Final Fantasy VII as the leitmotif of the Turks. It was composed by Nobuo Uematsu.

"Turks' Theme" plays during every encounter with the Turks, more specifically Reno, Rude, or Elena. Any room with the three Turks in it will have it as its background theme until they leave.

"Chase of the Highway"

"Turk's Theme" is included in the "Chase of The Highway" theme, playing from 3:18 to 3:48. In the movie, this coincides with when the action cuts from Cloud and the Remnants' motorcycle chase in the tunnel to Rude and Reno setting a bomb on the bridge.

"Theme of Turks (Before Crisis Version)"

"Dark Suits (from FFVII "Turks' Theme")" is another arrangement of the theme by Takeharu Ishimoto and is the eighteenth track of the Crisis Core -Final Fantasy VII- Original Soundtrack.

"Dark Suits (from FFVII "Turks' Theme")" is heard when Cissnei tells Zack in Gongaga village Angeal has been sighted and that Zack's parents are worried he won't ever find a wife. The theme also plays when Genesis Copies attack Shinra and Midgar and Zack is interrupted by Reno who tells him Sector 8 is the Turks' jurisdiction.

This section about an album in Final Fantasy VII is empty or needs to be expanded. You can help the Final Fantasy Wiki by expanding it.

A rearranged version by Masashi Hamauzu and Mitsuto Suzuki plays during most scenes with the Turks, simply called "The Turks' Theme".

In addition, the Turks have a dedicated battle theme called "The Turks: Reno", which plays when Cloud duels Reno in the church at the Sector 5 Slums, as well as his later duel with Rude near Aerith's house. It is a rock version of the classic Turks' Theme, which incorporates some leitmotivs of other themes, most notably the "Infiltrating Shinra HQ" and "Let the Battles Begin!" from the original Final Fantasy VII.

"The Turks' Theme - Ofiice", plays during scenes featuring them at the Shinra Building.

"Turks' Theme" is a music disc playable in jukeboxes given by a woman in the Sector 6 slums.

The song is part of the 8-bit arrangement album as its third track.

"Turks' Theme" is included on the first disc of this collectors' edition.

Both the original and Remake versions of this theme are included.