Tupsimati (トゥプシマティ, Tūpushimati?) is a recurring weapon in the series. It has come to be known as the staff of Louisoix Leveilleur.

Tupsimati is a staff that provides 62 damage and 402 delay. When using the same elemental magic as weather, it provides Enmity -20, Accuracy +30, Magic Accuracy +10, Magic Attack Bonus +20, and gives access to the Omniscience weapon skill. Its aftermath, increases Magic Accuracy and Magic Attack. It occasionally attacks twice. It deals 9.25 damage per second and accumulates 103 TP per hit. It can be equipped by level 75 Scholar. It can be obtained from the "Mythic Weapons" or the special Nomad Mog Bonanza 2010 (Rank 1) event.

Tupsimati was a staff wielded by Louisoix Leveilleur, who led the Circle of Knowing before the Seventh Umbral Calamity struck. After his sacrifice, the staff shattered and was recovered, consequently being kept in the Solar of the Scions of the Seventh Dawn's headquarters.

The Ascian Nabriales sought Tupsimati's power in the service of Zodiark, the dark counterpart to Hydaelyn whom the Ascians wish to revive. According to him, the staff is capable of drawing vast quantities of aether from its bearer's surroundings, which is why Louisoix could invoke the power of the Twelve without crystals during the Battle of Carteneau. Following Nabriales' defeat in the Chrysalis, Tupsimati was reclaimed by Minfilia Warde and the Warrior of Light.

The staff was kept safe with Minfilia until the events of the bloody banquet, during which she became the Word of Hydaelyn. At their reunion in the aetherial sea, Minfilia entrusted the staff to the Warrior of Light, who in turn lent it to Louisoix's pupil, Papalymo Totolymo. When the primal Shinryu was summoned, Papalymo used Tupsimati's power to seal it with the same spell that Louisoix attempted on Bahamut, and succeeded at the cost of his life.

During the Scions' journey into the aetherial sea via the Aitiascope, Papalymo's spirit aided them in the form of Tupsimati by vanquishing a number of souls that barred their way. 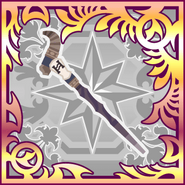 [view · edit · purge]In Mesopotamian mythology, the Tupsimati was the Tablet of Destinies, a clay tablet inscribed with cuneiform writing, also impressed with cylinder seals, which, as a permanent legal document, conferred upon the god Enlil his supreme authority as ruler of the universe. In other stories, the Tablet is possessed by Enki or Marduk.