Inside town:
Outside (Bartz's world):
Outside (merged world):

Tule is a village in Final Fantasy V, from Bartz's world. It is the first village visited in the game. The player can visit Tule right after acquiring the pirate ship, although this is optional. If the player visits Tule before heading to the Wind Shrine, the pirates will go to the pub and an optional scene featuring Faris Scherwiz (who also temporarily leaves the party) can be seen. Tule is later mandatory to visit after the Wind Shrine, in order to obtain a key to the Torna Canal.

Tule is also the location of the game's Beginner's Hall, named the Greenhorn's Club.

Zok, a resident of Tule, built the Torna Canal that separates Tule from Walse.[1]

The party stopped at Tule, where Faris and her pirates took over the pub, while Faris slept upstairs. Bartz Klauser and and Galuf Halm Baldesion appeared to be infatuated with the captain, confusing Lenna Charlotte Tycoon and irritating Faris.[1]

After the events in the Wind Shrine, the party returned traveled to Tule to talk to a friend of King Alexander Highwind Tycoon named Zok, whom Lenna knew as the one who built Torna Canal. Although he refused to hand over the key, worrying for Lenna's safety at first, he asked them to spend the night. During the night, Zok gave the key to Bartz, having learned about the party's quest to protect the crystals. Faris then left the town with Bartz and the party, with the pirates pleading that they'd follow her, only for her to request they stay behind and watch the hideout.[2]

Tule is located next to a large lake in the middle of the world, between oceans either side. In Bartz's world, this is between a stretch connecting the north and south halves of a continent; in the merged world, to its southeast is a river along the way to a larger content. East of Tule and across the ocean is the Torna Canal, separating Tule from Walse.

Tule itself is a basic lakeside village with a pub, inn, and shops. The most notable buildings are Greenhorn's Club, a secret hideout for adventurers,[3] and Zok's house, a large house located across a bridge over the river found north of the village square. Alongside the river is another small watermill, possibly also built by Zok. 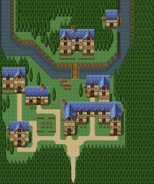 In town, the chest upstairs of the Greenhorn's Club is a monster-in-a-box and spawns a Goblin. The only other enemies are fought outside.

The main quest in Tule involves obtaining the key from Zok. This is done by entering Zok's house after completing the Wind Shrine.

If the party visits Tule before visiting the Wind Shrine, the pirates enter the pub and Faris leaves the party to join them. If the player approaches Faris upstairs of the pub they can view a scene of Faris sleeping and Bartz and Galuf being bemused by Faris's beauty. A glitch can occur as a result of this scene.

The party leader can play a piano at Tule's pub. Playing all the pianos in the world acquires the last song, Hero's Rime. This is the first piano the player is likely to encounter and thus results in the early lessons of finger exercises rather than playing a full song.

At the inn, if the player goes up to the stage, they can get a "special performance" from a trio of dancing girls.

Like in many towns, Tule's background theme is the "Town theme" (街のテーマ, Machi no Tēma?).

The village of Tule (GBA).

Tule on the World Map in Bartz's world (GBA).

Tule on the World Map in the merged world (GBA).