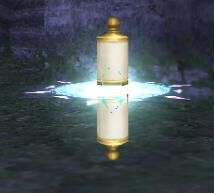 Tubes are smart bombs that were designed by Adelheid Sturm to cripple the forces of the Beastmen Confederate during the Crystal War in the history of Vana'diel in Final Fantasy XI. These levitating bombs detonate after a set amount of time when a target is close. Each tube releases an area of effect "blast" that inflicts targets with a status ailment.

Numerous tubes have been stolen from Bastok by Quadav during the many raids against Grauberg. They have shared their stolen goods with the goblins, who reverse-engineered them, creating potent poison-inducing vials and flasks. The goblins in turn sold a number of these vials and flasks to the Orcish Hosts.