Tu'Lia, also referred to as the Gate of the Gods, is an island that floats miles above Vana'diel in Final Fantasy XI. It was established by the Zilart ten thousand years before the beginning of the game's story and precipitated the fall of their civilization. Though history recorded that it had been destroyed when the Zilartian capital city sank into the sea, it escaped destruction and slumbered unopposed for millennia. It is the ultimate destination of the Rise of the Zilart expansion.

Owing to its location, Tu'Lia is colloquially called "Sky" by the player community.

While this region is subject to conquest, it generates no produce and therefore has no associated vendor. Control of Tu'Lia only determines which flag stands near the teleportal from the Hall of the Gods. 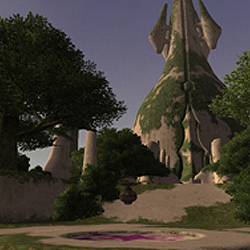 Ru'Aun Gardens is a pentagonal array of floating islands that forms the exterior of Tu'Lia. It is accessed primarily from a teleporter in the Hall of the Gods, the dilapidated temple of Altana that hides in the forests of northern Mindartia. A mechanism also exists to transport registered warriors between Ru'Aun and the Halls of Transference within the crags at Konschtat Highlands, La Theine Plateau, and Tahrongi Canyon.

Though abandoned for ten thousand years, the Gardens remain well-kept as a result of the many arcane groundskeepers and sprinklers that tend its landscape. In addition to a population of rare flamingos, Ru'Aun boasts elementals of every variety regardless of the current weather.

Four smaller islands orbiting the Gardens are inhabited by the Shijin, notorious beasts that serve as the divine guardians of the cardinal directions and their associated seasons. They are Byakko, who guards the West and the Autumn; Genbu, who guards the North and the Winter; Seiryu, who guards the East and the Spring; and Suzaku, who guards the South and the Summer. Each is summoned by an offering of appropriate items collected from other residents of Tu'Lia.

The La'Loff Amphitheater is found within five satellite islands surrounding the Ru'Aun Gardens. Each of its howling chambers has become the residence of one of the Crystal Warriors, whose powers seal the path to Tu'Lia's core. The magical properties of the amphitheater may be modified by Ark Pentaspheres, enchanted parchments crafted under a full moon in Ro'Maeve, to draw all five of these destructive entities to a single chamber.

Ve'Lugannon Palace is a ring of cermet halls that lies within the outer Ru'Aun Gardens. It is partitioned by blue and yellow gates which are operated by corresponding color-coded switches. Opening yellow gates closes all blue gates and vice versa. This sometimes results in conflict when individual explorers are moving in different directions and carelessly blocking each others' paths.

Whatever prestigious guests it might have hosted in the past, Ve'Lugannon has become little more than a breeding ground for golems and evil weapons. The arcane devices tending to the palace include watchful spheroids among the more common cleaners.

The Shrine of Ru'Avitau is the heart of Tu'Lia and lies at the center of Ru'Aun Gardens. Like Ve'Lugannon Palace, the halls of Ru'Avitau are divided by blue and yellow gates which are operated by matching switches and cannot be opened simultaneously. Passage through the shrine is further complicated by teleporters which sometimes have multiple destinations. These result in groups being unintentionally divided as they navigate the area.

Like Ru'Aun, Ru'Avitau is inhabited by all forms of elementals regardless of the weather. The arcane keepers seen in the gardens and palace also patrol its corridors. More importantly, the shrine is home to Kirin, master of the Shijin. Access to this famed manticore requires the defeat of his subordinates in Ru'Aun as well as the use of a finicky teleporter that only travels to his chamber on even-numbered minutes.

The Celestial Nexus is a control center contained deep within the Shrine of Ru'Avitau. It houses a massive crystal that functions as Tu'Lia's core. The Nexus is the key to the ambitions of the ancient Zilart and therefore a decisive location for Vana'diel as a whole.

The La'loff Amphitheater appears as the BMS for "Fighters of the Crystal".

The Amphitheater returns as the BMS for "Fighters of the Crystal".

An explosion at the Celestial Nexus.
Final Fantasy XI setting
Community content is available under CC-BY-SA unless otherwise noted.
Advertisement