Kemonomichi
Tsukuyomi is a dark-elemental Eidolon that appears in Final Fantasy Dimensions II. The signet can be obtained for Parai as a first-time completion reward for completing the eleventh floor of Babil Tower.

If his signet is obtained at the moment of its availability in Chapter 4-1, it will be able to provide Parai with a small boost for his max HP and balanced attack and magic stats. If a player unlocks the signet’s passive ability of increasing the amount Parai’s summon gauge fills by receiving damage by 28 points, they will be able to use Parai’s summon special attacks faster.

However despite the signet’s passive, Tsukuyomi is easily outclassed as the player progresses through the game and obtains stronger signets. Despite this, players can still take advantage of the buffs from Tsukuyomi's Divine Moonlight summon attack if Mootie is equipped with Tsukuyomi's signet.

The Tsukuyomi summon is based on the Shinto god of the same name. His official description describes him as the Eidolon of the Moon. Tsukuyomi is depicted as a massive beastly rabbit in attire reminiscent of the wandering ronin in Japanese history. As his signet is upgraded, Tsukuyomi’s fur changes color and is surrounded by jade-colored magatama jewels in his final artwork.

Tsukuyomi’s special attack is Divine Moonlight, which increases the attack, magic, and speed for all party members for two turns. Summoning Tsukuyomi costs 2 bars from the Summon Gauge.

The following are the abilities Parai can learn from Tsukuyomi:

In the original free-to-play versions of the game, Tsukuyomi was a dark-elemental signet that could only be obtained through the game's summon draw shop. However, he taught the Yasakani Jewel ability instead of the Darkness ability. In the premium versions of the game, Tsukuyomi’s Yasakani Jewel abilities were removed from the game and replaced with the Darkness ability. 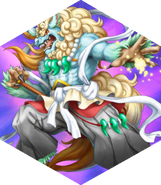 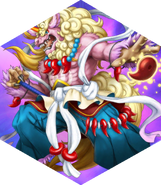 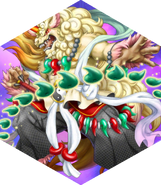 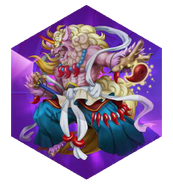 [view · edit · purge]Tsukuyomi-no-Mikoto (月読命?), or Tsukuyomi (ツクヨミ, 月読?) or Tsukiyomi (ツキヨミ?), is the moon god in Shinto and Japanese mythology. The moon was considered a male deity, brother and consort of the sun goddess Amaterasu. The kanji for Tsukuyomi mean "moon" and "read".

Tsukuyomi in Final Fantasy Dimensions II is represented as a monstrous rabbit, this might be a allusion to the folklore of rabbits on the moon.