Final Fantasy Wiki
Register
Don't have an account?
Sign In
Advertisement
in: Characters in Final Fantasy IV: The After Years, Ninjas
English

Akira Oguro
Tsukinowa is one of the Eblan Four in Final Fantasy IV: The After Years. He is a ninja boy whose skill would put an adult to shame, being as quick-witted and agile as the wind, just as his alias implies. He is passionate for the town of Mysidia and its citizens due to the time he spent there under Edge's orders.

Tsukinowa is short, with blue eyes and long purple hair pulled back into a ponytail. He wears a thin headband with a red stone in the centre, blue earrings and a green beaded necklace. His outfit consists of a light green poncho that covers the lower portion of his face, dark green trousers and black shoes.

Tsukinowa is the most outspoken of the Eblan Four, occasionally questioning Edge's action, but like the rest of them is loyal to Edge and Eblan and wants to uphold their ninjutsu traditions. Having spent an unspecified amount of time undercover at Mysidia, he has grown attached to Porom and worries about her during his mission when he resolves to return to Eblan and Edge.

When Eblan receives word of Baron stealing Crystals from the other nations, the Eblan Four become eager to assist Edge, and are sent on missions to gather information. Tsukinowa, under the alias of "Lapin", travels to Mysidia as a young student of magic. After a classmate turns him into a toad, Tsukinowa sneaks into the Tower of Prayers and eavesdrops on a conversation between Porom and a group of mages. Porom heads to Mount Ordeals with a Black and White Mage, unaware that Tsukinowa is following her.

Tsukinowa cares for Porom during the mission, and sympathizes with her worry for Palom. After the mission is completed, he returns to Eblan by walking across the sea. He reunites with Edge and the other Eblan Four within the Tower of Babil. After being forced to escape from the Mysterious Girl and Ifrit, they fall into the Underworld and land on the Falcon.

In the Gathering Tale, Tsukinowa watches over Porom and the other incapacitated characters below the Falcon's deck. During the ending, he is seen again as a toad in Mysidia. He quietly cheers for Porom when she and her brother are promoted to the elders of Mysidia. Back in Eblan, Tsukinowa and the other ninjas renew their vows of loyalty to Edge, and await their next mission.

Tsukinowa is the fastest character in the game, with a Speed stat of 65 at Level 99. His other stats are generally below average to poor, with his HP growth being not much better than the mage-type characters', while his Strength is lower than that of other physical fighters'. Tsukinowa is best when placed in the back row, as he has low defenses and can take advantage of boomerangs for their long-ranged properties.

Like Edge, Tsukinowa can dual-wield, and is the only one of the Eblan Four that can do so. He focuses on Wind-elemental Ninjutsu techniques and has the Steal ability. Tsukinowa can perform Band abilities with the other Eblan ninjas, as well as with Palom and Porom due to his time undercover in Mysidia.

Tsukinowa can equip the same equipment as Edge, except for claws. He is the only one of the Eblan Four who can dual wield, and so can take full advantage of the ninja weaponry like Edge.

Tsukinowa starts with 2 Kunais, a Leather Cap, a Foot Ninja Gear and an Iron Armlet.

Tsukinowa is fought as a boss, along with the remaining Eblan Four, at the beginning of Edge's Tale, as part of a training session. 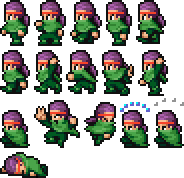 Tsukinowa at the Tower of Babil (iOS).

Tsukinowa, at the Western Cape (iOS).

Like the other Eblan Four, Tsukinowa's name is related to the moon. [view · edit · purge]Tsukinowa means "full moon" in Japanese. The alias that Tsukinowa uses when he is sent to spy in Mysidia is "Lapin". [view · edit · purge]Lapin is French for "rabbit". This refers to the legend of the Moon rabbit to tie into the moon-themed names of the Eblan Four. It may also refer to Tsukinowa being the youngest and swiftest of the four.