Retreats behind the column after taking damage, where it cannot be attacked. Hits all targets with Nautilus Charge on the next turn, inflicting great damage. Use trigger commands to stop it from unleashing Nautilus Charge.

Tros is a Cephalopod fiend in Final Fantasy X that appears when Tidus and the then unnamed Rikku try to raise the airship near Baaj Temple.

Enemy is Tough.
Susceptible to Sleep in original version.

After losing 350 HP, Tros will retreat to opposite side of the chamber. The party can no longer attack (unless the player uses Rikku to toss grenades), but can initiate a Trigger Command called Stand By to recover 50 HP each. Tros will use its Nautilus Charge attack for heavy damage. After 350 HP more is lost, the fiend will again retreat. This time, Tidus can select Pincer Attack from the Trigger Command menu and tell Rikku to swim in front of Tros, while Tidus swims behind it. It will no longer be able to use Nautilus Charge, and its Luck will be reduced to 1, but it will not drop Power Spheres if defeated in this formation.

In addition to its physical attack and Tentacles, Tros has an unused Bash attack, which has twice the attack power of Tentacles. It also has two unusual properties which would generally never be seen without hacking the game (although the former is possible to see by using the Expert Sphere Grid and major level grinding). The first is that it is vulnerable to Poison, but takes no damage from it when afflicted. The second is that, despite being a boss and not appearing anywhere else in the game, it can be captured. It will not show up in the Monster Arena if captured, but the game will still say it was captured if killed with a capture weapon, rather than saying it can't be. Furthermore, this capture is recorded in the save file.

With Rikku's Steal and Use with Grenades, the battle is easy. When Tros swims away, the player should defend to weaken Tros's next hit.

An easy strategy is to get Rikku's Overdrive up and mix two grenades to one-shot and Overkill Tros. 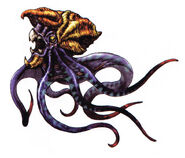 Tentacles.
Add a photo to this gallery

[view · edit · purge]In Greek mythology, Tros was a ruler of Troy and the son of Erichthonius by Astyoche (daughter of the river god Simoeis) or of Ilus I, from whom he inherited the throne.

Given its appearance as an octopus and its purple coloration, it may be a reference to Ultros.

Retrieved from "https://finalfantasy.fandom.com/wiki/Tros_(Final_Fantasy_X)?oldid=3363365"
Community content is available under CC-BY-SA unless otherwise noted.