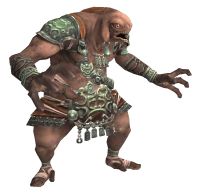 Trolls are a race of massive Beastmen in Final Fantasy XI that make their homes around Mount Zhayolm. They originally inhabited the precipitous mountain ranges that lie in the center of the Aradjiah continent. However, through the generations, ranks of Trolls made use of their brawn and courage to join the Gigas from the north and the Mithra from the south in the mercenary trade. The Trolls' ancestors served as a mercenary unit in the Imperial Army, and were afterward hired by the Moblins.

The reasons for their move to Mount Zhayolm are debatable, but they were able to maintain autonomy over their mercenary lands (also known as the Halvung Territory) by paying tribute to the Empire until the conflict for the Astral Candescence began. Thanks to the Moblins' generous technological offerings, the Troll mercenaries now possess equipment superior to that of the other Near Eastern beastmen, including naphtha-powered incendiary weapons and mass-produced cast metal helmets.

According to rumor, the Trolls also undergo anatomy-enhancing surgical operations in order to survive in the harshest of environments. Their might and hostility towards Aht Urhgan make the Trolls the Imperial capital's greatest threat. 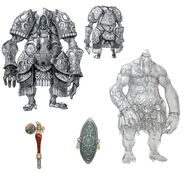 [view · edit · purge]A troll is a supernatural being in Norse mythology and Scandinavian folklore. In Old Norse sources, beings described as trolls dwelt in isolated rocks, mountains, or caves, lived together in small family units, and were rarely helpful to humans. Later, in Scandinavian folklore, trolls became beings in their own right where they lived far from human habitation, were not Christianized, and were considered dangerous. Depending on the region their appearance varied from ugly and slow-witted to looking and behaving exactly like human beings. Trolls are sometimes associated with particular landmarks, which at times are explained as formed from a troll exposed to sunlight.