The Troll is an enemy from Final Fantasy IX. The party can find it on the Conde Petie Mountain Path, and on the Lucid Plains and Pualei Plains on the Outer Continent.

It fights using physical attacks, as well as inflicting Berserk on a party member using Solution and Blizzara. Whenever it takes physical damage, it will automatically counter its attacker, dealing moderate damage to them. 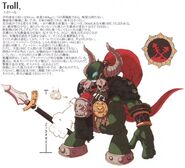 Solution.
Add a photo to this gallery

[view · edit · purge]A troll is a supernatural being in Norse mythology and Scandinavian folklore. In Old Norse sources, beings described as trolls dwelt in isolated rocks, mountains, or caves, lived together in small family units, and were rarely helpful to humans. Later, in Scandinavian folklore, trolls became beings in their own right where they lived far from human habitation, were not Christianized, and were considered dangerous. Depending on the region their appearance varied from ugly and slow-witted to looking and behaving exactly like human beings. Trolls are sometimes associated with particular landmarks, which at times are explained as formed from a troll exposed to sunlight.

Retrieved from "https://finalfantasy.fandom.com/wiki/Troll_(Final_Fantasy_IX)?oldid=3238390"
Community content is available under CC-BY-SA unless otherwise noted.