Palom's Tale:
The Crystals:
Troia Castle is a location in Final Fantasy IV and Final Fantasy IV: The After Years. It is where the eight Epopts rule over Troia and guard the Earth Crystal.

Cecil, Tellah, Yang, and Cid arrive at Troia Castle to obtain the Earth Crystal to trade it for Rosa, whom Golbez has taken captive, but find out the Dark Elf has already stolen it. They visit Edward in the castle infirmary, where he has been taken care of since washing ashore after Leviathan sank the ship the party was on. He gives them the Whisperweed to help them find the Crystal. When Cecil and his allies are unable to defeat the Dark Elf, Edward crawls out of bed to reach his harp, and plays a song that is transmitted through the Whisperweed to the Dark Elf's lair, and breaks the Dark Elf's spell that prevents usage of metal equipment.

After defeating the Dark Elf, Cecil and his friends return to the castle with the Earth Crystal and are contacted by Kain, who is ready to trade Rosa for the Crystal at the Tower of Zot.

Palom is sent to Troia to help train Leonora in the arts of Black Magic, and head to the Tower of Trials to train her. Upon returning, Leonora is entrusted with the Crystal to protect it from the Mysterious Girl, and both Palom and Leonora are forced to escape from Troia to the Lodestone Cavern.

In Edge’s tale, Izayoi is sent to investigate the events in Troia village disguised as a Epopt to spy and collect intel. Three guards block the castle underpass asking her why she isn’t in training. Palom is also waiting in the village and can be spoken to describing how scary women can be. Both the guards & Palom change their dialogue when Izayoi reverts to her ninja garb. She has lines only with Palom and successfully maintains her secret identity each time. There are also no black chocobos in the north forest & the Member Pass rooms in the pub aren’t accessible to her.

In The Crystals, Rydia, Edge, Luca and the Man in Black find Troia frozen over by Shiva. It is thawed once Shiva is defeated.

It is the first door straight of 1F. It is the chamber where the Eight Epopts of Troia are found. They inform the party, if spoken too, that the Dark Elf has stolen the Earth Crystal, and has taken it to its lair, the Lodestone Cavern. They also warn the party about the cavern's strong magnetic field and location. North of the chamber is the crystal room.

It is directly straight ahead the Epopts' Chamber, and it is where the Earth Crystal is kept. When the player visits it, the crystal dais will be empty.

The castle's infirmary can be accessed from 1F's left exit, which leads to the west wing. The first and only door leads to the room where Edward is recovering under the supervision of two doctors. If the player visits the infirmary, Edward will give them the Whisperweed. He offers to rejoin the party, but Tellah tells him to rest. When he senses the party on the verge of death in the Lodestone Cavern, he crawls out of his bed and plays the Melody of Lute to save them. Upon the party's return, he will inform the party about the magical song and gives them augments. His last message is "Save Rosa." After the events of the Giant of Babil, the infirmary is empty.

The bottom floor is accessible from 1F's right exit, which leads to the east wing. The East Tower is the first and only door, and it leads to the castle's treasure vaults. The left exit is B1, which, according to the NPC, was the former castle dungeon. It leads to the second bottom floor.

The second bottom floor can only be accessible once the party obtains the Earth Crystal, and the Epopts' permission. If the player tries to visit it earlier, the guard will deny access. A secret passage leads to the second bottom floor, which is the castle's treasure room, and contains eighteen treasure chests.

There is a line in a 4-panel comic done by Yoshida Sensha back when Final Fantasy III for the Famicom was released where frogged party members discuss it not being so bad being a frog, and that they should forgo saving the world and opt living as frogs instead. Someone at Square decided to quote this comic in Final Fantasy IV. The player can interact with frogs in Troia Castle moat. All the frogs in the Japanese version make frog sounds except for one, which says "It's nice being a frog..." This was translated in various ways for English. In the original the frog says "What's up?" The PlayStation translation changes things further and just goes with, "..." The 3D version says "This is life I tell you! I hope I never get turned back into a human."

Exterior of the Troian Castle. 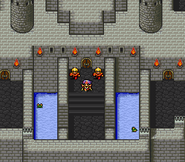