Various, depends on story, see below
Troia is a town in Final Fantasy IV and Final Fantasy IV: The After Years. It is the main settlement of the Troia kingdom and lies in the shadow of Troia Castle. The town has a black chocobo stable and the King's Bounty Pub, which commands a hefty price for its Member's Writ that allows entry to its stage area where dancing girls perform.

Palom is sent to Troia castle via a sponsored ship to help train Leonora in the primary arts of Black Magic, and can later visit the village to equip the party. They head north to the Chocobo Village to obtain a yellow one, trading it across the rivers south to the Tower of Trials to train her in Fire, Ice, and Lit magic. Later on, they return to Troia, rescuing its crystal from the castle. The bounty pub also opens in the village and Black Chocobo can be found in the north forest.

In Edge's Tale, Izayoi is undercover in Troia as an Epopt trainee to investigate the city. Palom is also waiting in the village and can be spoken to describing how scary women can be. Three guards block the Troia castle underpass asking her why she isn’t in training. Both the guards & Palom change their dialogue when Izayoi reverts to her ninja costume. She only has lines with Palom and successfully maintains her secret identity each time. There are also no black chocobos in the Chocobo Forest north & the Member Writ rooms in the pub aren’t accessible to her. Upon hearing about the Tower of Trials, she heads to investigate it.

The town lake is located east of the pub, just before the Black Chocobo Nursery. On the banks, there is an old man taking a look at the bathing dancing girls. If the player talks to the dancing girls in the lake, they will tell him to get out in fear of rusting his armor.

The nursery is the building farthest north in the town. Two black chocobos are shown on the second floor. All non-playable characters inform the player about why black chocobos are only found in Troia, where they can travel, and how they are grown.

Like most other towns, Troia has a pub of its own. A non-playable character guards the entrance to the King's Bounty Pub, and unless the player buys the 100,000 gil Member's Writ from the girl near the entrance, the exclusive pub cannot be accessed. If the player has talked to Cheatingway back in town, and if the girl in the counter is approached, a scene will trigger: Cecil will ask for milk to buy Cheatingway time until he arrives. The music box will then be unlocked. The pub also has a second floor, where dancer girls are mingling with some townsfolk.

The Bounty Pub is an inaccessible area because it is guarded by a non-playable character, and unless the player purchases a Member's Writ, he will deny the party access. A secret passage leads to the room, and when the player talks to the man in the counter, six dancing girls will put on a show. In the room, there are three throne seats, and the player will sit on the middle one as the girls dance.

The dressing room is accessible via a secret passage found behind the right chair. The only occupant is a dancing girl who informs the player that the room is used for dressing. Also, the Gil Farmer augment is found here.

"Troia" is the eponymous theme of the location. 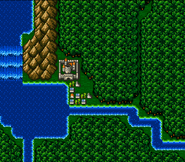 Troia on the World Map (SNES).

Troia on the World Map (GBA).

Troia on the World Map (DS).

Troia on the world map (PSP).

Items shop in the pub (DS/iOS).