Short sword with the power of water.

Triton's Dagger (トリトンダガー, Toriton Dagā?) is a recurring dagger and knife in the series. It is sometimes a powerful Water-elemental knife obtained late in the game, while other times being a relatively weak weapon.

Triton's Dagger is a dagger exclusive to the Advance and The Complete Collection remakes, being used only by Palom. It can be acquired by defeating the Flan Master that guards it. It provides 62 Attack, 40 Accuracy, +15 Intelligence, and will cast Flood when used as an item. The dagger is Water-elemental as well being a metallic weapon.

Triton Dagger is the strongest non-unique dagger, providing 62 Attack, 40% Accuracy, +10 Intelligence, and casts Flood when used as an item. It can be found in the Depths after defeating Kraken.

Triton's Dagger is the high-quality version of the Orichalcum Dagger, equippable at level 70 by Black Mages, Summoners, and Scholars. It has a damage of 21, a delay of 178, and boosts MP by 25 and Intelligence by 2. It can only be obtained via Synthesis.

Triton's Dagger is a high-level knife. It provides 68 attack power and +5 Intelligence, is water-elemental, and casts Flood on enemies.

Triton's Dagger is a level 1 dagger that provides +3 Attack and Initial EX Force +15%. It can be obtained by trading 450 gil, Knife, Power Shard, and Transmogridust x2 at the shop.

Triton's Dagger is a level 1 dagger and provides +20 Attack, +2 Defense, and Initial EX Force +5%. It can be obtained in the shop by trading 6,100 gil, Knife, and Chocobo Chick Powder.

Triton's Dagger (IV) is a unique Soul Break weapon for Palom. It significantly increases Magic more than Attack. Palom can cast Chaincast Boltstorm, which deals eight magic lightning and non-elemental attacks to one target, and he gains +10 Magic after mastering the Soul Break. 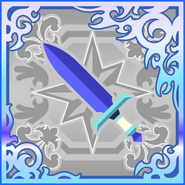 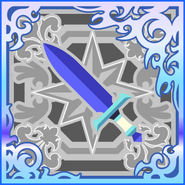 [view · edit · purge]Triton is a mythological Greek god, the messenger of the sea. He is usually represented as a merman, having the upper body of a human and the tail of a fish.