Ninja Stars
Tristam is one of Benjamin's four allies in Final Fantasy Mystic Quest. He is a mercenary, and will leave Benjamin to fend for himself at the opportunity for a treasure hunt. He nicknames Benjamin "kid", and considers the boy as being in need of his assistance. Tristam's town of origin is unknown, but he wields Ninja Stars as his weapon of choice and carries Explosives and the Dragon Claw on him at various points in the game, both of which he eventually gives to Benjamin. Tristam is notably the only ally who has his own musical theme.

Tristam wears typical ninja garb in white with yellow highlights. He has a helmet with a black tassel, an armor piece over a loose-fitting shirt and trousers, and pink gauntlets. He wears brown sandals over yellow tabi socks and a yellow scarf. Although he does not use it in battle, Tristam also has a sword sheathed on his back. His hair is black and his eyes are dark brown.

Tristam is a money-conscious treasure hunter. He refuses to give up the Elixir Benjamin needs except for an exorbitant amount of money, or Benjamin's help in traversing the Bone Dungeon. Despite the danger the world is in, Tristam continues treasure hunting with Spencer, but he is also more helpful to Benjamin, giving him items or advice for free. He also annoys Benjamin by persistently calling him "kid" no matter how many times Benjamin states his name.

Benjamin meets Tristam when searching for an Elixir to cure Kaeli (its implied that Tristam stole the Elixir from the chest at the Sand Temple), and when he is unable to pay Tristam's high price, he is recruited to help Tristam raid the Bone Dungeon for treasure. Tristam sells him Explosives during the raid, and claims the Dragon Claw from a chest after defeating the Flamerus Rex. He then gives Benjamin the promised Elixir and leaves. Tristam makes a small reappearance in Fireburg, where he gives Benjamin a key to unlock any door, giving it to him on the house.

When Reuben falls off the Rope Bridge, Tristam appears and tags along. Blocked from progressing in the Alive Forest by the Giant Tree, Tristam reminds Benjamin that Kaeli can talk to trees, and the pair head to Aquaria to meet her. Tristam meets Spencer, and the two head off on a treasure hunt, but not before Tristam gives Benjamin the Dragon Claw he had acquired earlier. He along with Spencer can later be found sitting at a table inside the Hotel in Fireburg.

After Benjamin has beaten the Dark King and is preparing to sail around the world, Tristam makes his way onto the boat at the last second, hoping to lay claim to any treasures the pair would find.

Tristam's time as a playable character is the briefest among the four allies. His first time joining Benjamin is his lengthiest partnership, delving the depths of the Bone Dungeon and restoring the Earth Crystal. Tristam's second time partnering with Benjamin is unique in the incredibly brief nature when compared to the behaviors of other party members. Joining Benjamin on the Rope Bridge after Reuben's fall, Tristam assists in clearing a path through the Alive Forest until he and Benjamin are blocked by the Giant Tree. He accompanies Benjamin back to Aquaria and promptly leaves to treasure hunt with Spencer; Phoebe's grandfather.

Tristam's weapon of choice is the Ninja Star, it deals shoot-elemental damage and it can also inflict Poison and Paralyze. The weapon has limited ammo, and when Trsitam runs out of ammo, he'll attack the enemy with Bare Hands. His armor is also unique, as its the only piece of equipment that protects against Fatal attacks. The Moon Helm protects him from Fire-elemental attacks.

Tristam receives the least amount of upgrade between his first time joining and his second. He never obtains any additional spells (possessing only the Life spell on both partnerships) and his stats—while appropriately increased to match his new level—are noticeably low when compared to other characters. This creates the first instance, where upon Tristam joins the second time, that Benjamin is stronger than his ally.

The following is Tristam's raw stats before weapon and armor modification. 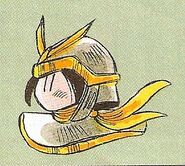 [view · edit · purge]Tristan is one of the main characters of the Tristan and Iseult story, a Cornish hero and one of the Knights of the Round Table featuring in the Matter of Britain. The name "Tristan" is a Celtic/Gaelic name that means "sad".

Because of the common confusion surrounding R and L sounds in Japanese transliteration, it is unclear if the character's Japanese name is meant to be "Rock" or "Lock". His Japanese name, ロック , is the same as that of Locke Cole from Final Fantasy VI. This received scrutiny in a V-Jump interview with the developers, who said it was a coincidence.