The previous Triple Triad installments are minigames included in the respective main games. Instead of a proper main game, the host for Portal App's Triple Triad is a news aggregator. Triple Triad is preinstalled within the app; what is missing to launch it is card data downloaded separately. It cannot be downloaded separately from the Final Fantasy Portal App, making it not a stand-alone game. It is suggested to create an account to both keep one's game progresses, and to gain Portal Points. It is possible to fully play as a guest, but this will make it impossible to exchange points for cards in the shop and consequently to fulfill one of the in-game achievements and complete the card collection.

The battle between Cosmos, the goddess of harmony, and Chaos, the god of discord, has raged constantly since time immemorial. It is amidst this interminable maelstrom of bloodshed that you are summoned to confront a veritable army of renowned Final Fantasy pugilists and overcome them in a test of wills known as Triple Triad.

In the solo mode (single player), the player can select and play a match against an opponent, mainly one of the main characters from the Final Fantasy series. During the initial in-game tutorial, the player will face the first two opponents: Warrior of Light and Firion. After the tutorial is over, the player can arrange his/her deck(s), get used to the interface and rules, play against the same opponents again, or unlock the next opponent(s) and eventually higher difficulty levels to win better cards.

The player needs Crystals, one for each match, even in the versus mode (multiplayer). Crystals cannot be won back, but will regenerate one every 15 minutes up to five. Before maintenance of October 20, 2015, the time needed was 30 minutes.

With update of November 10, 2015, Moogle was replaced by Y'shtola. Cards, decks and rules used by the new opponent remained the same.

The player can select up to three different rules only in versus mode. While playing in solo mode rules are fixed for every opponent and level and those cannot be changed.

In solo mode rules Reverse, Fallen Ace, and Roulette do not appear. There is a hidden rule, Combo, that may trigger after Same or Plus. Flipped cards from those two rules will act as just-now played cards, and if ranks are stronger than opponent's nearby cards, will flip them too. The Combo rule may trigger repeatedly, but cannot trigger Same or Plus.

Combo applies even to cards normally flipped by the card that activated Same or Plus. For example, having the Same rule active via a card that matches top and left side of other two cards in those positions, and the bottom has a higher rank of the opponent's card, even in the case the two matching cards already belong to the player, Same will activate, not flip the two card that activated Same (because they already belong to the player) and flip the opponent card at the bottom and from it propagate the Combo effect. This applies for both the player and the opponent alike.

Cards depict monsters, characters and special events from the Final Fantasy series. The background color of a card is blue while it belongs to the player, and pink while it is owned by an opponent. Each card has a unique three digit number, but card names are not always unique, and this may happen for both monster cards and character cards. Each card belongs to a series, and possesses a rarity level and ranks.

Rarity level is represented by golden stars in the bottom left corner of the card, ranging from one to five stars. The rare five-star cards are the only ones that can have an "A" in their ranks. The card's edge indicates its rarity with the use of different colors: dark grey for rare one; light gray iron for rare two; bronze copper for rare three; light blue silver for rare four; and dark yellow gold for rare five.

Ranks are shown in the top left corner of the card, each facing a different direction (top, right, bottom and left) indicating the strength of the card in that side. To capture an opponent's card, a higher rank must be placed in front of the opponent's rank, unless rules like Same and Plus are active; in these cases more strategy is required. Versus mode has three more available rules that may affect the way of capturing a card: Reverse, Fallen Ace and Roulette, the latter by randomly selecting up to three different rules (overlapping rule restrictions still apply).

Most of the cards have plain bottom right corners, but a few have a differently shaped and colored corner. Those are considered limited and come mainly from fulfilling achievements with some more from the Final Fantasy Portal App's shop. They are divided into Ltd. and Res., the first with a blue corner (pink before to claim at least one of the same card) and the latter with a multicolored corner. Out of 536 cards 36 are Ltd., all available as achievements, and 22 are Res., of which 15 are available only in the shop for a total of 1,350 points (4,000 points in the Japanese version, which has one card more).

Below a short gallery with some examples:

Normal cards and Ltd. alike can be collected in tens to "morph" them, obtaining the same card with different ranks order. Cards from Dissidia 012 Final Fantasy series and Res. ones exist in a unique edition, and one cannot change their ranks. After complaints from Japanese players, Square Enix decided to limit card selection while arranging a deck in a way that the same card, even if with different ranks order, can be used only once. The limit affects only the player while solo opponents' decks remain unaffected, and in some cases they are using the same card twice. Because of the limit, collecting more than one copy of a unique edition card lost any meaning other than for collection value.

Another limit, already included into the first release of the game, affects limited cards in a way that only the last slot of a deck can be used for those cards. It can be lifted through achievements, more specifically after winning 50, 200 and 300 matches in versus mode, adding another slot each time, and eventually leaving the player with four out of five slots for placing any card.

As the player starts their journey they must undertake a short tutorial and be given a starter deck of five cards selected from a unique list. This means that in solo mode one will never see those cards again, making them the most difficult cards to collect. In case the player will lose a match no cards will be removed, and the winner will get a copy of the claimed card. In case of a limited card the situation is a bit different for the winner: the player cannot claim a Ltd.-type card from a defeated opponent unless they already have the same card. The unclaimable card will be shown darkened in the spoils screen. Res.-type cards are never claimable, and will always be shown darkened.

If the player has 99 copies (max amount) of a card, it will be shown normally in the spoils screen. If the player claims that card nothing will happen (even if the game declares the player won it) and the player remains with 99 copies of it. The player will score the win normally, but wasted a Crystal. Wins shown on the solo screen is capped at 9,999.

The main way to obtain a card is to claim it after winning a match one at a time because of the Trade Rule One. As a general guide cards of rarity level one and two are available in easy mode; rarity level three are available in normal mode; and rarity level four and five are available in hard mode. Some cards (up to rarity level four) may appear even in a different mode, lower or higher, than the usual one. Cards of rarity level five belong to decks with a very low appearance ratio. For the first release of the game, in both easy and normal mode, any solo opponents was using five decks (as many as the player can use) and in hard mode four common decks and two rare decks, each with a different rare five card. With the release of new expansions, the opponents affected by it were changed: sometimes getting just one or few new decks, and sometimes getting more decks and changing all of the existing ones too.

For the 1st anniversary of the English version, all players, including those of the Japanese version, were awarded with a special three weeks time-limited gift set: a daily bonus of three Crystals after playing a match; an increased chance of starting a match against a rare deck in Hard mode; a 130pts discount for a newly added 5* Res. card into the shop. Chance up for rare decks was extended until the end of September. The double points earned since the middle of August should be considered not related to this event.

Below are the games that appear:

A list of all the cards available, including card image and how it can be obtained;

A list of solo mode opponents' decks and rules they use;

A list of cards available only from the tutorial;

A list of the limited cards from both achievements and the shop;

Cards can be sorted in different ways: by number, by series, by rarity, by strength of their ranks, and even by when a card was achieved, in both ascending and descending order. 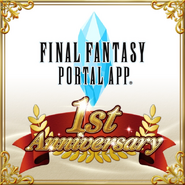 For the 1st anniversary of the English version of Final Fantasy Portal App were granted some extra crystals to Triple Triad's players.

Limited gift (a blanket) for guests of Dissidia 2015 Event featuring all of the main characters, the same appearing here as opponents.

Rule Variations and the Trade Rule for a Triple Triad match.

Start of a Triple Triad match.

Achieving a Draw on a Triple Triad Match.