Blast off! This is it! Say goodbye!

Trigger Happy (トリガーハッピー, Torigā Happī?) is a recurring ability in the Final Fantasy series. It is an ability used exclusively by Prompto Argentum.

Trigger-Happy is Prompto's final Technique. It is a multi-hit firearm attack that can break off enemy appendages. It depletes the tech bar by three. Trigger-Happy takes 72 AP to learn on the Ascension grid after learning Starshell and Gravisphere.

The standard version of Trigger-Happy has Prompto draw a pair of firearms before performing a dodge-roll and unleashing several shots while strafing. He then dodges again and unleashes several more shots while strafing before unleashing the finishing shot with his left-hand gun. If there are multiple available enemies, or multiple target zones on a single enemy, Prompto will change targets between the first barrage, the second barrage, and the finisher. If the technique activates critically, the animation for Trigger-Happy changes slightly. Prompto will fire twice as many shots, standing in place when firing after each dodge-roll.

When character-swapping to Prompto, Trigger-Happy is a Bullet Arts technique. After drawing his firearms, Prompto stands in place and unleashes multiple shots towards the target before holstering his right-hand gun, switching the left-hand gun to his right hand, and firing an explosive round from his right-hand gun. Every hit from this version of the ability will be critical. This version of Trigger-Happy is unlocked by completing Final Fantasy XV: Episode Prompto.

Trigger-Happy's success depends on Prompto's position on the field. It can fail and hit no enemies if he is positioned behind an obstruction. When Prompto wields the Calamity or the Death Penalty, each shot has a chance of inflicting Poison or Instant Death on the opponent. With Quicksilver, it's almost guaranteed to break all of the enemies' appendages.

In the main game, Prompto will use two of his equipped firearm when performing either version of Trigger-Happy. In Episode Prompto, he will perform the Bullet Art version with his normal handgun in one hand and the Lion Heart in the other. 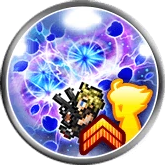