Trident of the Oracle

A strong and noble woman was loved by the world. She granded succor to the stars and brought man and god together. This was the trident of her line. It makes allies of the wielder's holograms.

Trident of the Oracle (神凪の逆鉾, Kannagi no Sakahoko?) is the traditional weapon of the Oracles' bloodline in Final Fantasy XV. It is a tall trident that has a wing ornament at the bottom, and is used to commune with the gods according to Lunafreya's Play Arts figure's box.[1] It is one of the royal arms, meaning it can be wielded by a Lucian king.

According to legend, Bahamut descended from the stars and handpicked a maiden from the land of Tenebrae, giving her his trident and the power to speak to the gods and fight the Starscourge. The first Oracle was Aera Mirus Fleuret. The trident has stayed as the Oracles' heirloom ever since, somewhat similar to the Ring of the Lucii for the kings of Lucis.

Though the Oracles are known as the royalty of Tenebrae, The Oracle is also one of the Lucii and the trident is a royal arm. One of the thirteen statues of the Old Wall in Insomnia is fashioned after this Lucii who wields a giant version of the Trident of the Oracle. The monoliths in Steyliff Grove Menace extol the story of a king who took up the position of Oracle and inherited her trident after she was killed by a monster.

When Ardyn Izunia is pulled into an otherworldly dimension to meet with Bahamut, he is confronted by an image of Aera who attacks him with the Trident of the Oracle if he rejects the fate the gods have in store for him.

In Kingsglaive: Final Fantasy XV, the statue of The Oracle wields the trident in the battle against the Diamond Weapons. Nyx Ulric and Glauca end up fighting on his shoulder, but he tosses the trident and warps away.

When Lunafreya Nox Fleuret, the current Oracle, forges a covenant with Titan and Ramuh, she wields the trident. However, when Lunafreya is in Altissia, the trident appears to be in the possession of the Altissian government, who are reluctant to let her summon Leviathan for the damage it would cause the city. Prince Noctis negotiates with First Secretary Claustra to let Lunafreya proceed with the ritual. Claustra meets Lunafreya at her mansion and lets her use the trident.

Lunafreya asks Leviathan to lend her blessing to Noctis. The sea goddess takes offense at being awoken by a mortal and attacks Lunafreya, who repels the offense with the trident. Leviathan is attacked by Niflheim forces and goes on a rampage. Though fatally stabbed by Ardyn Izunia, Lunafreya uses the trident to summon the souls of the past Lucian kings to empower Noctis, who subdues Leviathan and forges a covenant with her. The Trident of the Oracle joins the array of royal arms Noctis wields at once, and he performs the finishing blow using the trident. Lunafreya passes away after passing on the Ring of the Lucii to Noctis in a dream. When Noctis awakes he no longer has the trident.

When Noctis later meets Shiva on the train to Gralea, he receives the Trident of the Oracle from her. It becomes one of his royal arms he can wield during Armiger. Trident of the Oracle is among the weapons Noctis uses to deliver the final assault on Ardyn during their battle at the Citadel, and in turn Ardyn has his own version of it.

When Noctis prepares to fulfill the prophecy of the True King, he sits upon the throne of Lucis and the royal arms manifest around him, the trident included. The Lucii emerge to plunge the arms into Noctis's body and as he dies, he emerges in the realm between life and death[2] where the royal arms eject from his body. The Trident of the Oracle is taken by The Oracle King and Noctis directs his army of Lucii to cleanse the world of Starscourge. The Lucii, as well as the royal arms they wield, turn into glimmering light particles and disappear.

When the player attacks with the trident, it will leave a hologram that stays for a few seconds and will damage enemies that touch it. The Scepter of the Pious also gets this trait when it takes the form of the trident. The holograms stack and thus do high damage to stationary targets.

The Trident of the Oracle's basic combo is to stab the enemy and with forward directional input it skips to the powerful combo finisher. Any other directional input has Noctis jump in that direction and begin an aerial combo that consists of two stabs. The second aerial combo is a descending plunging attack that has a high break modifier. Its phase counter is a jumping stab.

Warp-striking with the trident has Noctis warp above the enemy and attack it from above with a plunging attack, similar to the fighting style of Aranea Highwind. The warp-strike is good for dodging and attacking.

Trident of the Oracle is also used as part of Armiger and Armiger Unleashed; notably, Noctis finishes Armiger Assault with the trident.

When the player changes weapon when Noctis is idle, he shows it off with a twirl, flick or spin, but with the Trident of the Oracle, he has no flare and only stares at it solemnly.

Lunafreya fights a daemonic Noctis in a fiery battleground that resembles depictions of Hell. She wields the Trident of the Oracle, but Noctis takes it from her and seems to use it to kill her before coming to his senses. As he realizes what he has done, he throws away the trident and drops to his knees in anguish.

A trident from the faraway world of Eos. It acts as a symbol for the clan responsible for healing the Star and is the bridge between the gods and humanity. This weapon is also known to be one of the Royal Arms that the king of Lucis wields. The youngest Oracle in the history of Eos is said to have had this trident in hand when summoning the Goddess of the Seas, the Leviathan.

During the New York Toy Fair in February 2017, an unpainted version of Lunafreya's Play Arts action figure was displayed. It comes with the Trident of the Oracle. Lunafreya's Play Arts Kai figure became available in July 2017. Its description on the Play Arts Kai box is the same as the in-game menu description, but the last line is changed to: "The Oracle uses it to commune with the gods."

Lunafreya wields the Trident of the Oracle.

The Oracle King with the trident.

Illustration in the Cosmogony with an Oracle holding the the trident. 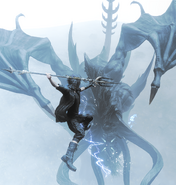 Noctis wields the Trident of the Oracle.

[view · edit · purge]A trident is a three-pronged spear used for spear-fishing, and was also a military weapon. Tridents are featured widely in mythical, historical and modern culture. The major Hindu god, Shiva the Destroyer, and the Greco-Roman sea god Poseidon or Neptune, are classically depicted bearing a trident.

Ardyn's character embodies various allusions to Jesus. Bahamut's illusion of Aera impaling Ardyn's chest with the trident when he is suspended by Bahamut's swords may thus be allusion to Longinus, the name given to the unnamed Roman soldier who pierced Jesus in his side with a lance said to have created the last of the Five Holy Wounds of Christ.

On its topmost handle facing the head of its trident formal, is a yellow sageo cord wrapped in fashion by what is generally known as daisho style. Sageo are generally used more for the saya of katana, but spiritually function akin to shimenawa or sacred ropes or cords to designate items as shintai or yorishiro, which are objects gods are believed to behold, or use as, physical embodiments.