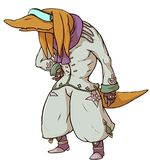 Tricksters spin a web of deception, twisting the flow of battle to their advantage.

Trickster (トリックスター, Torikkusutā?) is a recurring job. It is a bangaa job, which focuses on the use of cards as weapons, and have skills revolving around status effects. Their Magick and Speed stats are typically high at the expense of MP.

The Trickster attire is bright clothing with purple and green patterns, in addition to purple shoes. It also includes shades to cover their eyes. This likely implies style and wealth.

Trickster is a job for the bangaa. They use cards as weapons, allowing them to attack from a long range, and their skills primarily revolve around inflicting statuses. The Trickster job features an excellent Speed and Magick growth, but with the downfall of very low MP.

Trickster appears as a job for bangaa.

[view · edit · purge]In mythology and the study of folklore and religion, a trickster is a god, goddess, spirit, man, woman, or anthropomorphic animal who exhibits intellect or secret knowledge and uses it to play tricks or otherwise disobey normal rules and conventional behavior.