Trickster is an Elite Mark in Final Fantasy XII. The hunt becomes available upon reaching Mt Bur-Omisace, so if the player wishes to fight it with Larsa in the party, they should return to Rabanastre immediately upon reaching the mountain to accept the hunt, because Larsa will leave the party if the player proceeds further in the story.

Intrigued by the white chocobo that helped stave off vandals who harassed a chocobo flock and vanished as quickly as it came, Gurdy went to petition for the hunt of this elusive mark. This also gets the attention of Monid, whose good friends, the parents of his young, adoptive hume son, were killed by this chocobo.

Monid will assist the party during the battle.

Trickster is also fought alongside all the other chocobo enemies in the Zodiac versions' Trial Mode in Stage 58 where the Hermes Sandals (uncommon) and Bubble Belt can be stolen from it.

Legendary Chocobo of the purest white Plumage. Though typically hunting in Solitude in mountainous Regions, it is ever a Member of the Flock, coming to aid of its Kin when Danger threatens. A Chocobo Wrangler who was the Victim of a Band of Mountain Bandits and was saved by the Trickster could not resist petitioning a hunt for this rarest of Marks, to wild Enthusiasm from Clan Hunters across Ivalice.

Can change elemental affinities during battle; is always weak against one element and absorbs all the other elements.

Can change elemental affinities during battle; is always weak against one element and absorbs all the other elements.

The Trickster is fast and will run around the area, and often appears invisible when not near it. It becomes much more powerful at low health. Its attacks can do over 1,500 damage without buffs or strong enough armor, and it attacks quickly. It spawns with the Protect status.

When Trickster gets down to around 1/3 HP it will use White Wind, which removes and makes it immune to status effects for two minutes. After Trickster's HP drops below 50% its HP Attack wears off, and it will no longer use Wild Charge, but it will start using Choco-Comet. At low health it brings up a paling and becomes immune to physical damage, and all elemental magick will heal it, except for one chosen element, which will periodically change. Its paling wears off eventually, with a similar duration to White Wind. The increased attack speed remains, however, and Trickster's combo attacks can hit up to six times.

Trickster will sometimes run away, but should return eventually even if the player doesn't chase it.

The party should begin by casting Dispel to remove Trickster's Protect. One strategy is to use the Nihopalaoa + Prince's Kiss ("Alarm Clock" in the original version) trick on it immediately when a change occurs in the chocobo's pattern, or sometime before it hits the half HP mark, to put it to Sleep (using the Indigo Pendant and the Sleep spell also works if the player doesn't have Nihopalaoa). The player needs to get rid of Monid, as his attacks will wake the Trickster.

While the Trickster is asleep the player can lower the characters' HP into low ranges to increase the damage Balance can deal. The damage output is even greater under Faith status, and with the Reflect status and casting Balance off the player characters, reflected onto the chocobo. In critical health Trickster will gain Anti-Magick and White Wind, and grow in attack power and defense. Status immunity from White Wind lasts around two minutes, after which it can be put to sleep again.

Without using Sleep, the player should aim to unleash the biggest Quickening chain the party can manage right before the chocobo becomes critical, because the Trickster sets up a physical paling and all elemental magick will heal it, except for one chosen element, which will periodically change. Balance/Bio/Drain/Scourge are non-elemental and can be used through the paling in the original game; only Balance still works in the Zodiac versions. Quickenings are ineffective when the paling is up. Gambits that exploit Trickster's elemental weakness bypass the paling. As little as one gambit at a time is required, and the more elements that are checked at a time, the faster the process; if gambits for all but one element are set up, and characters are not casting, weakness to the one missing element can be inferred and cast manually.

If Trickster runs away, it is best not to chase it as to draw attention from other enemies. Trickster will return so one can just stay put.

Defeating Trickster unlocks its sprite in the Sky Pirate's Den and awards the "Sharpshooter" trophy/achievement in The Zodiac Age. 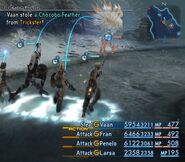 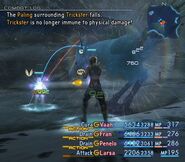 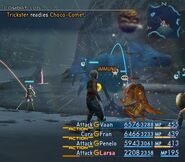 [view · edit · purge]In mythology and the study of folklore and religion, a trickster is a god, goddess, spirit, man, woman, or anthropomorphic animal who exhibits intellect or secret knowledge and uses it to play tricks or otherwise disobey normal rules and conventional behavior.