創造神の試練 (Sōzōshin no Shiren?, lit. Trial of the Creator God)

Proud creatures, what has become of your souls?

Trial of the Creator is a challenge event in Final Fantasy Brave Exvius, released in conjunction to Grand Gaia Chronicles. It is based on the battle against Maxwell, the first major antagonist in Brave Frontier. The player can earn several prizes, including recruiting Maxwell herself as a unit.

Defeat Maxwell with a limit burst

Trial of the Creator - ELT

Defeat Maxwell with an esper

Party of 5 or less (Companion included)

Maxwell has a pre-emptive attack and so the player starts at the second turn, which is important due to Maxwell performing certain attacks once every few turns. Her attacks are mostly Light based and can attack up to 7 times per turn, so resistance to Light is desirable. She will start with 'Genesis', and will continue to use it along with normal attacks almost every turn.

Her attacks 'Rune' and 'Sacred Song' are used every four turns, during which Maxwell forgoes the use of 'Genesis'. She also uses 'Destiny' every five turns, which deals fixed 160% HP damage to a single target. This attack must be guarded against as otherwise it is impossible to survive it, that or she must be defeated before she can use it.

Threshold attacks include: 'Meteor', used at 60% HP; 'Resurrection', used at 50% HP; 'Endless', used at 30% HP, and 'Revival', used at 20% HP. Below 30% HP, she is capable of casting Meteor once every turn. Maxwell's first three threshold attacks cannot be used in the same turn, they will be used in sequence each turn. All this is compounded by her having (in the ELT stage) increased stats, high DEF and a 25% resistance to physical attacks which cannot be dispelled.

For both difficulties the battle plays more or less the same, except for few differences in the Missions. In the starting difficulty the player must Evoke Diabolos in order to recruit Maxwell. This is a problem as it carries an inherent -50% weakness to Light and Maxwell inflicts Light Damage, so using it with a unit with inherent Light Resistance like Cecil is helpful, otherwise Cecil is a useful Tank to keep some attacks in check.

Fortunately for the player upon subsequent releases of the Trial, units like Sakura and Minfilia are available, and both provide helpful damage mitigation abilities. Sakura can decrease Light Damage and all damage by 20%. Minfilia has offers stronger Light resistance and can buff the party's DEF/SPR or ATK/MAG for several turns, making both reliable for the battle. Marie is also another alternative albeit her Light Resistance is a counter, but she can inflict major elemental debuffs.

Ling is useful too as she is a major breaker (her debuffs inflict 45% reduction) and can also inflict Disease to further debilitate Maxwell. One should also bring a unit with a Dispel-like ability (either Dispel or Fingersnap) as Maxwell's Sacred Song is dangerous. Bushido - Freedom can be used to dispel the party of debuffs but it should be used by a unit with low ATK.

Attackers with Man-Eater (either by Diabolos or not) are useful. Olive, Noctis, Cloud of Darkness, are helpful. Fryevia is an excellent unit to use specially in ELT as Maxwell's SPR remains low and her Ice damage bypasses any of Maxwell's defenses making her extremely useful.

In order to Evoke Diabolos easier (or otherwise have an Esper ready for ELT difficulty) the player should use chainers. Chizuru, Gilgamesh, Orlandeau, are some useful units. However the player should be mindful to not use any Light weapon or they will inflict no damage. This is specially true of companion units commonly equipped with Excalibur.

The player should always be mindful of the turn count in order to Guard against Destiny effectively as one of the Missions demands the player that none of its party members are KO'D.

The trial's boss theme is "The Creator" from the Brave Frontier: Original Soundtrack, composed by Hikoshi Hashimoto. 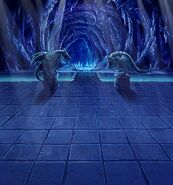