I've always wanted to see the marvelous architecture of Treno. I can hardly wait!

Dark City Treno, also known as Treno; the City of Nobles, or simply Treno, is an economically polarized city in the Kingdom of Alexandria on the Mist Continent on Gaia in Final Fantasy IX. Treno has no middle class; instead, its inhabitants are either extremely wealthy or extremely poor. The nobles live down on the waterfront, while the poor live up in the slums around the city. Treno is known as the Dark City due to the perpetual state of darkness.

Treno is visited twice in the story and can be visited at anytime once the party has access to the Hilda Garde III, the Invincible, or a red chocobo.

Garnet, along with Steiner and Marcus, go to Treno to search for Supersoft, an item known to cure all forms of petrification, to cure Blank in the Evil Forest. Garnet explores the city alone, and spots Kuja at the auction house, ready to leave for Burmecia. While searching for it in the Synthesis Shop, they meet Doctor Tot, Garnet's childhood tutor, who has the Supersoft and agrees to give it to Garnet. After visiting Doctor Tot's residence to pick up the Supersoft, he shows Garnet how to get back to Alexandria via the Gargan Roo, an underground passage.

Later on Zidane visits Treno via Gargan Roo to participate in the Tetra Master card tournament. Vivi, Eiko, Freya, and Amarant come along, all for different reasons, such as sightseeing, or simply having nothing better to do.

Freya talks to Amarant about his past. He wanders around Treno freely despite being a wanted man and tells Freya he is wanted because he was framed by Zidane when he worked as a security guard in Treno. Eiko discovers Quina, whom the group has not seen since Madain Sari. Shortly afterwards, Quina jumps into a canal while looking for food, and is assumed to have committed suicide by an old man witnessing the jump. Quina does not rejoin the group until later on in Lindblum.

Once Zidane has finished the Tetra Master tournament, either by winning three games or losing the third game, he and the others fly to Alexandria on the Hilda Garde II with Regent Cid after hearing of Kuja's attack on the city.

The city is fortified by walls on all sides. Canals run through the city, but during the player's time in Treno, travel is mostly confined to walking. On their way to find Supersoft with Marcus, Garnet and Steiner will travel on a boat.

If the player throws 10 gil into the fountain by the entrance 13 consecutive times, they will "feel happier..." but also acquire the Gemini Stellazzio coin. Throwing 10 gil into the well 50 times has the "thug" nearby steal the money (after the player exits the screen and returns) and buy a new Tetra Master deck (he goes from deck #11 to #12)

The town is divided in two halves: the rich part where the nobles live and the slums. The slums have a pub and a small market where the player can find the Taurus Stellazzio coin and buy items.

The pub in the slums' area of town has an inn where the player can stay for 100 gil to replenish HP and MP. The waitress will tell the player's Treasure Hunter Rank when spoken to. The corner has a wanted poster of Amarant. The pub has an entrance to the underground waterway in the basement, which Tantalus uses to sneak into Dr. Tot's house as part of the story.

Treno is home to the Card Stadium used for Tetra Master tournaments. The tournament opens after the party has returned from the Outer Continent, when the player must partake as part of the story. Afterwards, the player can come freely to play cards, and in endgame plenty of new players become available for challenge, from whom many rare cards can be won.

Doctor Tot's residence is in a tower to the far left side of town, and one of the locations linked by the Gargan Roo. The door there is locked when the player first arrives to town when in control of Dagger.

The weapon shop, also known as "Knight's House", sells weapons. There is also a challenge available to fight the monster in the pit below the shop one-on-one for a prize.

In the auction house, the party members can get their hands on rare items not available elsewhere. Some can be sold for a premium to the citizens of Treno. New items become available throughout the course of the story. Kuja is spotted here by Garnet when she visits Treno with Steiner; it can be presumed he has some stake in the ownership of the auction house, as he is seen there when it is closed to the public and gives the auctioneer commands.

The synthesis shop is to the left from the outdoor cafe. The scholar here will buy Doga's Artifact if the player bought it off the auction. The shop can be used to synthesize new equipment from items the player already has in their inventory. The nobles in the area outside the synthesis shop talk about the current top auction item.

This is also where Tantalus sneaks into to steal a Supersoft, entering from the door on the right that is otherwise inaccessible.

Queen Stella's residence is located by the Synthesis Shop. She will reward the party if they bring her the Stellazzio coins they have found for her collection.

After the first game in the Tetra Master tournament, the player can watch an ATE of Vivi reminiscing of his old home. Going back up the stairs to the right opens the next ATE, Good Old Days, in which Amarant talks with Freya about his past. Freya should say she is interested, because if she says "I won't force it out of you", the Lessons of Life ATE will not be available later. After the second round of the tournament, the player can watch the ATE that was opened up by choosing for Freya to be interested. There are other ATEs that will become available as the player walks from area to area, depending on the ATEs they have already viewed: Lessons of Life, in which Amarant talks about his first meeting with Zidane; Hallucination of Quina thinking there is food in the canal; and Premonition, in which Eiko has a bad feeling about Mog.

Gilgamesh, or Alleyway Jack/Four-Armed Man, appears during Active Time Events both times the storyline calls for the party to visit Treno. During Garnet and Steiner's stay, the player can view an Active Time Event called "Treno Tradition", in which Garnet is mugged by a pickpocket called Four-Armed Man. During this event an exclamation mark will appear, and if the player presses

when the ! appears, Garnet loses 500 gil. The sum is 1000 gil if the player misses. After witnessing the event, Steiner can go to the same location (right outside the Synthesis Shop) where he meets the Four-Armed Man who hands over a Power Belt.

When Zidane, Vivi, Eiko, Freya and Amarant visit the city, the Four-Armed Man reappears during ATEs: In "Memories by the Water", he meets Amarant and flees, due to Amarant's reputation as a bandit. After seeing him talk to Eiko, the Four-Armed Man believes he could hold her hostage to get money from Amarant; however, in "City People", Eiko and Quina reunite, and believing Quina to be Eiko's bodyguard hired by Amarant, the Four-Armed Man flees yet again, dropping a Chimera Armlet.

Queen Stella collects the rare Stellazzio coins that can be found all around the world. She rewards the party with items whenever they bring her new coins.

When the party first meets Mogrich outside the Knight's House (weapon shop) in Treno, he has a letter:

If the player played the Hippaul racing minigame in Alexandria, Mogrich will have a letter in Treno's Knight's House:

In the auction house, the player can bid on rare items not available anywhere else. The key items can be sold to Treno citizens for profit.

When Treno is visited as Zidane, he can partake in the tournament in the card stadium. The man at the entrance will give directions for playing Tetra Master. Zidane must register at the booth on the left and when ready, enter the stadium. There are three rounds, the first being against Attic Man Wake. The player can save their game before attempting the tournament and reset and try again if they lose.

In the second round the opponent is Cardona Bishop. However, if the player viewed the ATE with Vivi after the first round in the tournament, they could choose whether Vivi should "pass by home" or stay in Treno. Choosing the latter will give Zidane a different opponent in the card tournament's second round, Mario of the Slums, who holds the rare Namingway card as well as the Tiger Racket card (but the player will miss out on scenes in Quan's Dwelling; the player can still get another Namingway and Tiger Racket card later).

The last round is against Sailor Erin who plays with oglop cards. For winning the tournament, the player will receive a Rebirth Ring.

There are things the player can only do during the card tournament (see below).

Treno has a unique weapon shop: it is also a small battle arena where monsters are kept. When the player talks to the saleswoman they can choose to fight the monster with a member of the current party. If the monster is defeated, the party receives an item; if they are defeated, they are returned to the weapon shop, and the defeated ally is left with 1 HP. Each monster can be killed once. There are a total of four monsters that change at various times, and if the player fails to defeat a monster before the next one appears, the previous one cannot be fought again.

Defeating the Behemoth as Dagger yields the Dragon Lady achievement/trophy in the latest versions of Final Fantasy IX.

During the card tournament[]

When the party visits Treno for the card tournament, the player can view what the other characters are doing via Active Time Events. Vivi can visit Quan's Dwelling, his home. The player can follow him there to find out more about Vivi's past. Leaving Treno during the card tournament and taking the road to Dali is the only way to get the Mayor's Key to open the locked door in the village and obtain the Burman Coffee for Morrid.

There are no enemy encounters within the city outside of the weapon shop battle challenge where the player cannot get a Game Over. The world map areas outside Treno consist of Bentini Heights and Bohden Heights. This is where the player can encounter the Ghost for the friendly monsters sidequest. Ragtime Mouse may also appear in forests.

Treno is reminiscent of Jidoor from Final Fantasy VI; both belong to aristocracy and are cities where the poor are treated with disdain. Whereas Jidoor evicted its poor to live in Zozo, Treno has a slum at its easternmost edge. Both have an auction house where ragtime music plays. 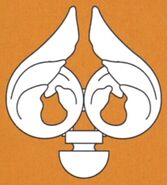 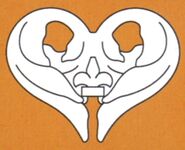 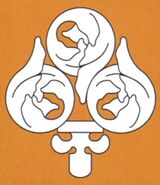 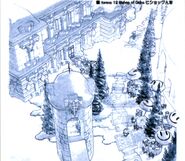 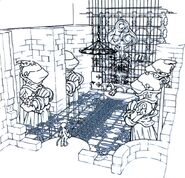 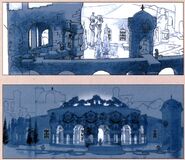 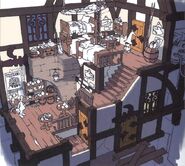 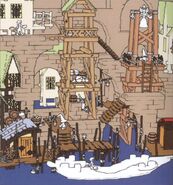 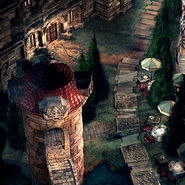 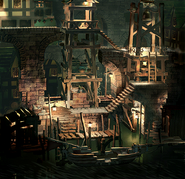 Battle background outside the train to Treno.

Battle background in the monster cage in Treno.

Concept art of Kuja as a Treno nobleman.

Concept art of a Treno soldier.

Concept art of the dog the moogle in town plays with. 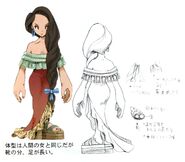 [view · edit · purge]Treno means "train" in Italian. However, Treno is called Toleno in the Italian version. Both "Treno" and "Toleno" are correct transliterations of the Japanese name トレノ.