Short
The Treaty-Blade is a greatsword in Final Fantasy XII. Crafted by the Occuria, it is capable of cutting nethicite. It is obtained during the storyline after the plot events at Giruvegan and is treated as a key item which means it cannot be sold. As with the other key item greatsword Sword of Kings, it does not require a license to equip and so can be equipped by anyone, and unlike standard greatswords offers no knockback. In the original version its stats are the same as the Sword of Kings, however the Treaty-Blade is stronger in the Zodiac versions.

In the past, the Occuria gave a blade known as the Sword of Kings to King Raithwall who used it to carve the Dawn Shard, Midlight Shard, and Dusk Shard from the Sun-Cryst, and forge the Galtean Alliance. The Occuria gives the Treaty-Blade to Princess Ashe, Raithwall's descendant, for a similar purpose: to cut her own shards from the Sun Cryst, and use them to destroy the Archadian Empire and Venat, rogue Occurian who has been teaching men how to manufacture their own nethicite. By this act Ashe would submit to Ivalice being controlled by an Occurian-appointed ruler, the destiny that the Archadians are trying to overturn.

Atop the Pharos Ashe is given the chance to cut new shards of nethicite from the Sun-Cryst, and use them to fight the Empire. However, she realizes the Dalmasca she is fighting to reclaim is one which does not abuse the nethicite's power. Ashe refuses the Occuria's assistance and does not use the blade.

Unlike the Sword of Kings, the Treaty-Blade is not lost and remains in the party's inventory.

None
None
After plot events in Giruvegan

None
None
After plot events in Giruvegan

The Treaty-Blade appears as a weapon stolen from a collector named Durilda by a mysterious thief. Gilgamesh is falsely suspected. 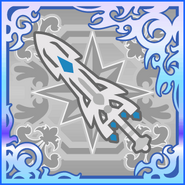 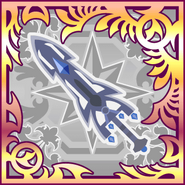 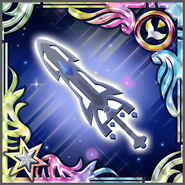