Treasure Hunter (アイテム発見移動, Aitemu hakken idō?), also known as Master Thief (目利きの手触り, Mekiki no Tezawari?), Rare Item (レアアイテム, Rea Aitemu?), Item Collector, Pickpocket, or Bandit, is an ability in the Final Fantasy series that typically allows players to increase the chance of gaining rarer items, from battle, either via item drops or stealing, or both. In terms of its functionality, it shares its traits with the Thief Gloves and the Thief's Hat which also increase the rates of stealing.

Treasure Hunter is an augment ability in the 3D versions that doubles the drop rate of items. It is received automatically once every map is completed.

The Mog's Amulet accessory makes all items dropped by or stolen from enemies to always be rare items. It can be bought from Sector 7 Shop for 10,000 gil.

The Jeweled Ring doubles the amount of items or Materia dropped by defeated enemies and adds 20 to Luck. It can be bought from Net Shop Shade for 10,000 gil.

In the game data, every enemy has four item "slots" that contain all the possible steal and item drop combination possibilities. Usually higher slots have better items. Rare Item doubles the drop rate of the second item slot, and reduces the chances of getting any items in the fourth slot to 0, meaning it can actually prevent the player from obtaining certain items. Both Mug and item drops work the same way and Rare Item affects them both. The ability is learned on the GF Bahamut for 250 AP.

The Pickpocket ability is an auto-ability for armor. It increases the chance of stealing rare items to half, leaving the other half chance open to a common steal. It can be customized to an armor by using Amulet x30.

The Master Thief ability is an auto-ability for armor. An improved version of Pickpocket, it allows the player to always steal rare items, removing the possibility of making a common steal. It can be customized to an armor by using Pendulum x30.

Double Items is an ability learned on the Lady Luck dressphere. It requires mastering Gillionaire beforehand and takes 100 AP to master. It doubles the drop rate of items after battle, and is stackable with the other party members' Double Items if they have it mastered. It can also be accessed by passing through the red gate on the Treasure Hunt Garment Grid.

Item Hunter is an ability learned on the Thief dressphere that requires 60 AP to master and increases the odds of items dropping. The Thief's Master Thief also lets the character steal rare items from opponents for the cost of 20 MP.

Butterfingers is a creature ability on the Ray of Hope garment grid that causes enemies to always drop rare items.

Treasure Hunter is a passive ability available to Thieves learned at level 15. When a creature is defeated, Treasure Hunter may let a party obtain more and better items from the creature's normal loot table. It is an extension of Gilfinder, a level 5 Thief ability. At level 45, a thief gets Treasure Hunter 2, increasing the effectiveness of Treasure Hunter.

Due to its nature, potentially making players rich, there is wild speculation on how Treasure Hunter's success rate is decided, but no stat other than "Enhances Treasure Hunter" has ever been confirmed to affect it.

There is no equippable ability to make enemies drop more items, but the player can acquire rare loot from enemies by acquiring different Monographs that are otherwise unobtainable. Monographs give a fixed percentage of the dropped loot of being of the rare kind and is unaffected by the Chain.

Stealing is unaffected by battle chain. The only way to improve the chance to steal better items is to equip the Thief's Cuff accessory.

All stealable items are divided into three categories:

With the Thief's Cuff accessory, the chances increase to:

The accessory Connoisseur's Catalog has the passive ability Item Collector that doubles the chance of receiving rare spoils after battle. It is acquired by using the catalyst item Mnar Stone on a maxed out Collector's Catalog.

The passive ability Item Collector raises the chance to obtain rare items after battle; Item Scavenger does the same for common items. Paradigm Pack allies can learn them, or they can be an effect achieved by equipping accessories. Only the highest value is used; these abilities do not stack. Monsters with the Resourceful trait learn one of them. Item Collector increases the drop rate of rare items to the maximum of 4.2 times normal; Item Scavenger MAX, common items to six times normal.

Discover items hidden on tiles upon moving to them.

For a list of items found with Treasure Hunter, see individual location articles.

Treasure Hunter (Move-Find Item on the PS) is a movement ability available to the Chemist job class. The ability allows characters to discover hidden items upon moving to a tile. The lower the character's Bravery the better the chances of finding rare items with the Treasure Hunter ability. As characters with low Bravery can permanently leave the party, Rapha is an ideal Treasure Hunter, as she naturally has low Bravery.

The Bandit job lets the player receive more items from enemies as battle spoils. The Merchant job does the same for Gems. The Fortune Egg accessory doubles the amount of items dropped from battle. It is found in the Star Chamber or bought in the multiplayer shop in Guera for 3,000 points.

The Treasure Band accessory also increases the chances of enemies dropping rare items. It seems that the effect of equipment are stackable.

Treasure Hunter is a special ability with three levels of power, usable by Locke, Zidane and Vaan, and the Lv1 version can be taught to any party member using the Pillager's Tome. During the entire stage, Treasure Hunter increases the chance of the player finding rare items, higher level versions offering greater increases.

Treasure Hunter (Lv1) is a reactive ability that costs 12 CP to equip. It is active for the entire length of the stage. It slightly increases the chance of getting a rare item and has very low strength. It is learned by Locke (level 20), Yuffie (default), Zidane (level 10), Lilisette (level 30), Vaan (level 25), and Noel (level 20). It can be taught to any character by using the Pillager's Tome.

Treasure Hunter (Lv2) is a reactive ability that costs 16 CP to equip. It is active for the entire length of the stage. It moderately increases the chance of getting a rare item and has low strength. It is learned by Locke (level 65), Yuffie (level 35), Zidane (level 50), Vaan (level 70), Balthier (level 50), Benjamin (level 75), and Noel (level 55).

Treasure Hunter (Lv3) is a reactive ability that costs 20 CP to equip. It is active for the entire length of the stage. It significantly increases the chance of getting a rare item and has medium strength. It is learned by Locke (level 90), Yuffie (level 70), Zidane (level 90), Vaan (level 90), and Noel (level 95).

Treasure Hunter is a passive ability that raises the chance that enemies will drop rare items. It can be used by Death Searcher, Gigantrot, Left Claw, Lucky Toad, and Mimic Jackpot.

Master Thief is the job level 10 ability for the Thief. It doubles the success rate of stealing abilities and does not stack with similar effects from items. It costs 3 slots to equip. 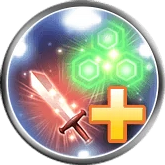 [view · edit · purge]Treasure is a concentration of riches, often one which is considered lost or forgotten until being rediscovered.