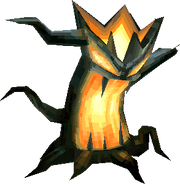 The Treant (トレント, Torento?), also known as the Wood Eyes, the Trent, or the Torrent, is a recurring enemy in the Final Fantasy series; having appeared in Final Fantasy IV for the first time. They often resemble trees in their appearances, often with a face carved into them.

Due to their tree-like nature, they are usually weak to the Fire element, and occasionally have an affinity with the Earth. They also frequently attack with physicals, and by inflicting Berserk or other beneficial statuses such as Protect on themselves and allies.

A common variation is the Elder Treant (エルダートレント, Erudātorento?) or the Mammon (マモン, Mamon?). These usually have no visually consistent traits between appearances, other than sharing the traits as their variant, albeit with greater stats.

The Treant is an enemy that can be fought around Troia, frequently appearing with Mortblossom enemies. They are weak to the Fire element, and only attack the player party physically.

A pink variant, the Elder Treant is found in the Sylph Cave. With almost ten-times the HP as its weaker cousin, it shares its weakness to the Fire element. It attacks in a similar fashion but it also counters when attacked by using the Berserk spell on themselves or their allies.

They can also be found in Edge's Whyt minigame, Ninja Blade Glade. They attack by flinging branches and may be dispersed with two shurikens.

Main article: Treant (The After Years)

The Treant is an enemy that has a weakness to the Fire element and uses only physical attacks. It can be fought in Rydia's Tale in both the Agart Mine and the Passage of the Eidolons, and also in Edward's Tale outside Baron.

The Elder Treant also makes an appearance, albeit with a lesser impact, only appearing as a random encounter in the Challenge Dungeon during Kain's Tale.

The Treant is an enemy fought in the second world encountered around Castle Exdeath. It has the Berserk ability, which it will use on its allies to increase their damage output on the party. It also has the damaging Death Claw ability, teachable as a Blue Magic spell, which can reduce a party's member's HP to single digits.

A cyan palette-swap appears as a stronger palette-swap known as Mammon. Fought in the Great Forest of Moore, they are usually fought with magic-orientated enemies, whom Mammon will cast Berserk on them which will hamper them. For its place in the game, Mammon is not as dangerous as the Treant since it lacks the Death Claw ability, but it uses stronger physical attacks against the party.

A green-brown palette-swap, the Triffid is the third and strongest variant of the Treant. Fought in the merged world as a random encounter near Ghido's Cave and the Guardian Tree, it is not much tougher than the Mammon enemy. It utilizes the same Berserk and strong physical attack strategy as the Mammon.

The Treant is an enemy genus found that resemble walking trees that come in a variety of colors. They are weak to the Fire element and the Dark element, and are usually of the Warrior class. They are relatively large in size, and are found in outside areas. They drop a variety of woods, roots, leaves and mushrooms. The quantity of drops, more than any one drop individually, make them frequently targeted enemies. They use attacks which inflict statuses, most notably Blind, which can be inflicted through its Entangle and Drill Branch attacks.

One enemy in the Treant genus is the aptly named Treant enemy. They appear between levels 35 - 37 in the Batallia Downs area of the forested region of Norvallen, and between levels 73 - 76 in the Vunkerl Inlet area of the Derfland Front. Following the standard traits of the Treant family, they are weak to Fire and Dark and are of the Warrior class.

The Treant is a plant/golem-type enemy, fought in various areas of the Golmore Jungle. A docile enemy, Treants will not attack the player unless they are attacked first. They will tend to cast Protect on themselves. They are also fought alongside the Elder Wyrm during the boss battle, where they will not be docile.

Treants are a recurring type of enemy, found most commonly in the Black Shroud and Dravania. In the Gridania scenarios of both the original release and A Realm Reborn, the adventurer, Yda and Papalymo run afoul of angry treants early on in the story.

Treants are fought in The Myrlwood in Cleigne, and during the Feeling the Mad Old Trees Hunt. They are capable of inflicting Mollified and Confusion.

Treants are a group of tree-like entities that absorb Earth-based attacks and are weak against Fire. They have no evade stat, so all attacks on the Treant will land. They have a variety of attacks, with the ranks of Treant slowly becoming more equipped to buff themselves.

The Dryad enemy only has the Leaf Rain enemy ability in its arsenal, while the rank two Treant enemy has the Life Nymph ability to heal itself. The rank three Elder Treant also has access to status which can inflict the Protect and Shell statuses.

The Treant is an enemy and also a possible monster that the party's monster unit(s) can transform into.

Treant is an enemy family and appears as animated trees with frightful faces carved into them.

This section about an enemy in Dice de Chocobo is empty or needs to be expanded. You can help the Final Fantasy Wiki by expanding it.