Deals damage to an enemy equal to 1/32 of the party's total steps taken.

Enemies using Traveler will use the player's amount of steps for the damage calculation. To achieve the max damage of 9999, the player would have to walk 319,998 steps.

Traveler is a technick that causes physical attack damage to a target and multiple enemies around it based on the number of steps the player has taken since last dealing damage with it.

The calculation depends on this formula:

A hidden counter keeps track of this data. Whenever the counter exceeds 999, or damage is dealt with the technick, it resets to 0. Traveler has a success rate of 100% and will never miss. In the original version, it can be bought in technick shops in Rabanastre and Nalbina Fortress for 6,700 gil and can be learned from the License Board for 65 LP. In the Zodiac versions, Traveler is available from technick shops after the party obtains the Dawn Shard and is also available from a treasure in Trial Mode Stage 31 with a Diamond Armlet. 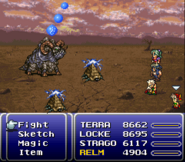