Trauma is a boss from Final Fantasy VIII, encountered in the Ultimecia Castle's Art Gallery. It is one of the sorceress's eight minions. Trauma is assisted by Dromas, small support machines.

In the NTSC-U/C and PAL versions, Leviathan can be drawn from Trauma if the player did not draw it from NORG earlier.

In its artwork, Trauma is named Clay Lord (クレイロード, Kurei Rōdo?). Its field entity reference is "haniwa" in reference to haniwa (埴輪?), the terracotta clay figures.

Ultimecia gave partial life to this weapon of the future. Pulse Cannon destroys any enemies in its way.

Meltdown
Leviathan (Only once)

Trauma is hidden until the player releases it by correctly naming a painting. The gallery's floor has a picture of a clock with hands pointing to VIII, IV, and VI. The values refer to paintings with those particular letters: VIII for "Vividarium", IV for "Intervigilium", and VI is "Viator". The player must enter the three titles in that order. This is supposed to be Latin for "In the Garden Sleeps a Messenger", but many of the pictures' names are Greek, falsely spelled or made up.

Trauma can create Dromas and damage all characters with its Spirit-ignoring Mega Pulse Cannon, which it will use once two Dromas are killed. It can also cast Drain on the Dromas to heal itself, eventually killing them.

Since Trauma will only use its Mega Pulse Cannon if two Dromas have been killed, it is advisable to leave at least one of them alive and concentrate on attacking Trauma. Meltdown can be used to lower its high Vitality. The player can stock up on Meltdowns from this boss if they still have room for the spell, as it is an excellent spell to have for both spellcasting and junctioning.

Trauma is a Level 6 Boss Card in Triple Triad used for playing the minigame and for turning into Demolition Ammo with Quezacotl's Card Mod. It is a rare outcome from successfully carding a Turtapod or a Caterchipillar. 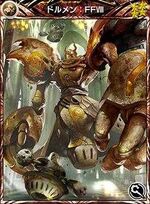 Concept art of Trauma and Droma. 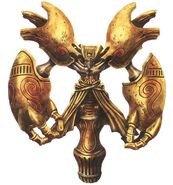 [view · edit · purge]A dolmen, also known as a portal tomb, portal grave or quoit, is a type of single-chamber megalithic tomb usually consisting of two or more upright stones supporting a flat horizontal capstone (table), although more complex variants exist. Most date from the early Neolithic period (4000 to 3000 BC). Dolmens were typically covered with earth or smaller stones to form a barrow. In many instances, that covering has weathered away, leaving only the stone "skeleton" of the burial mound intact.