Traps (トラップ, Torappu?) are a recurring element in the Final Fantasy series, most often found in dungeons, that hurt the party outside of battle, usually triggered by walking on them. Some treasure chests are actually traps in disguise, hiding monster-in-a-box along with rare treasure. Another kind of trap is a pitfall.

There is a spike wall trap in the Cave of the Gi. A slippery surface on the floor causes the player to continue moving uncontrollably if they run over it. If they approach the wall over the slippery surface when running, they will continue moving into the spikes. This removes 500 HP from each member of the active party, but never makes a character fall below 1 HP.

Be really cautious with this flower. It'll snap at anything If you're going to go through here... do it the instant it has its mouth closed.

In the Ancient Forest, the Big Eaters (fan translation) (大喰らい, Ō Kurai?), large pink flowers on the ground, are actually traps and snap around the party if the player steps too close. This removes 999 HP from each member of the active party but never makes a character fall below 0 HP. The flower traps can be neutralized by placing a Scent Ball (くす玉草, Kusudama Kusa?) inside them.

The traps that remove HP technically take off 1 HP more than the end result, but 1 HP is added on after. For example, the large pink flowers remove 1000 HP, then add 1 HP. Since when removing the HP the player cannot fall below 0, the added 1 HP will put them if they have less HP than is being taken off. Due to this, if a player enters one of the flower traps with a member in the Death status, they are brought back to life with 1 HP.

Traps are hidden until the player walks over them. They have a chance of not activating the first time, making the player aware of its location without suffering consequences.

However, if the trap does activate, it can cause harmful effects for the player:

The player can forcefully activate traps with the Stomp command, which can be useful depending on the trap: Trampoline might get the player out of a dangerous situation, for example.

After the trap is activated, there is a chance that it vanishes from the floor completely. Some auto-abilities make traps easier to avoid: Detect Nearby Traps reveals traps if the character walks close to them, Detect All Traps shows the location of all traps on the mini-map, and Evade Traps will make sure they never activate, even if the player uses to Stomp command. There are also Folios that players can read to deal with traps, such as Trap Evading Primer which removes all traps from the floor and The Seeing Book which reveals the entire mini-map of the floor, including traps and items.

Traps appear as red circles on the ground with magickally inscribed Ivalician script floating over them. They are initially hidden, and appear when a player character carries the Libra status or is wearing the Bangle, but the traps' properties are not revealed. Triggering a trap affects all nearby characters. Status ailments can be prevented by equipping the appropriate accessory before triggering the trap.

Enemies or Espers cannot set off traps, nor are they affected by them if a nearby character steps on one. Traps can be avoided by floating over them or equipping the Steel Poleyns accessory.

Traps don't exist naturally and randomly, they can only be set up on the ground by Filo. Traps can be triggered by Flying units or units under Float status.

Filo's skillset includes the setting of various traps, called Snares. These include the Defense Snare, Speed Snare, and Power Snare. Filo can set traps a short distance away from her, and they will activate whenever an enemy unit passes over the trap, decreasing the statistics of all enemies in a medium area radius and deals minor damage. The traps will set off automatically after some time when not triggered.

In Zegnautus Keep in Chapter 13 the player can find magitek troopers lying on the floor. While most are dormant, some are "traps" and will grab at Noctis as he steps over them. Some of these live MTs can be spotted as they turn their head toward the approaching player. The player must button-mash as per the prompt to release from the grip.

Depending on the setting of a quest, many hazards and traps may be scattered within the field of the quest and should be avoided, including:

Traps are hidden tiles that contain treasure and can be found in almost all battlefields. If the character does not have the Treasure Hunter ability or a low enough Bravery stat, traps will cause negative status effects.

The latter three traps: Mine, Mossfungus, and Cursed Stone only appear in Melee of the The War of the Lions.

Traps exist as preset battlefield features and may also be placed by the Ranger. When a unit stops on the tile where a trap is laid, the trap will deploy. Passing over the trapped tile to another tile does not trigger the trap, nor do floating and flying units.

There are four types of traps:

Certain missions involve destroying traps as the objective; the only way to do this being either stepping directly on the trap and suffering its effects or, if done late in the game, using Vaan's Salvage ability on the trap.

The Emperor can make use of various traps in battle that are tripped when his opponent steps on them, causing damage.

In Dissidia Final Fantasy Opera Omnia, all of the Emperor's special attacks have traps attached that trigger rebound damage when the enemy hit by the trap takes a turn.

Traps are hidden tiles within the field that carry beneficial or harmful effects. They can only be revealed with three ways: either by stepping on them, casting Eureka magick, or using the Eye of Argon item on Ashley.

These traps will reset themselves whenever Ashley leaves the room.

Traps are invisible until triggered, or unless Eyedrops are used (which makes visible all of the traps on that floor). There is a random chance to evade traps. The No-Traps collar allows Chocobo to always evade traps, and the Penalty collar causes Chocobo to always trigger traps. Traps can also be set off by monsters, which will causes the monster to suffer the effect of the trap and the trap to be revealed. Flying monsters are immune to traps, as is Chocobo if he is morphed into the form of a flying monster.

Trapped floor that forces an encounter in Final Fantasy (PSP).

Spike wall trap in Cave of the Gi in Final Fantasy VII. 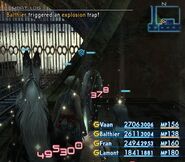