Mt. Gagazet in chapter 3 if Kimahri's concerns were answered in chapter 2 correctly

Fight alongside your very own pet.

The Trainer is a dressphere in Final Fantasy X-2 obtained on Mt. Gagazet in Chapter 3 if the player answered Kimahri's concerns correctly in Chapter 2. It is one of the few dresspheres in which each character has exclusive abilities.

If the player sleeps in the cabin on the Celsius at least once per chapter, they will be allowed to rename their pets by speaking to Barkeep and selecting "Pet Shop".

The Trainer dons a long, flowing skirt with long sleeves and gloves.

Yuna wears a tan and brown corset top with yellow and black straps above blue and white straps. She wears long tan and brown sleeves with gloves, a long blue skirt with red trim on the front and brown sides that has dark blue ribbons laced through yellow clasps in the front. Kogoro is an orange dog with purple tufts of fur and gold markings on his head, shoulders and tail. Kogoro is a male dog resembling Yojimbo's pet Daigoro from Final Fantasy X. This is play on words, as dai means "big" and ko means "little" in Japanese.

Rikku wears a tan and light green corset top with white and purple straps over yellow and black straps. She has long maroon sleeves that cover her hands held on by black and blue straps. She wears a long yellow and blue skirt with blue ribbons laced through yellow clasps. Ghiki is a orange and tan male monkey wearing a purple shawl. His face is red and he has two pieces of fur tied with blue and yellow clasps. He has a long purple and white tail with orange and blue extensions sticking off the tops of his head.

Paine wears a dark purple and orange corset top with black studded straps. She has long brown and tan evening style gloves, which act like a falconer's gauntlet. She wears a long light purple skirt with dark red ribbons laced through silver clasps. Flurry is a female hawk with white feathers on her chest and blue and white feathers on her neck and head. Her wings have red feathers and she has an orange beak.

Yuna's victory pose is to sigh in relief and look down at Kogoro. Ghiki climbs down onto Rikku's arm, and she pets him, while Paine strokes Flurry's neck.

Mastering Trainer requires 870 AP for Yuna and Rikku, and 900 AP for Paine. Because it requires a special weapon, there is no accessory or Garment Grid that allows the player to access Kogoro/Ghiki/Flurry abilities outside of the Trainer dressphere.

That look in your eyes. You'll serve me well.

Stats differ among the characters for this dressphere.

The Trainer dressphere increases Attack, Magic and Accuracy by 1 point per each level. Every girl has a different skillset. Its regular attack range is one tile ahead of the character. Multiple copies can be found on the ground inside the tower or bought in shops.

In Final Fantasy X-2: Last Mission, the names of the abilities "Pound!" and "Swarm! Swarm!" from Yuna and Rikku were switched.

The three pets allude to the tale of Momotarō, where the hero's companions on his journey are a dog, a pheasant, and a monkey. Flurry uses a bird model from Final Fantasy X from when Tidus awakens in the Submerged Ruins

. While Yuna's and Paine's pets appear in the original game, there are no monkeys like Ghiki in Final Fantasy X. Ghiki appears to be patterned after Sun Wukong, the Monkey King from the Chinese novel Journey to the West. The coloring and "hair antennas" are part of the traditional depiction.

Originally, Paine was supposed to command a snake, but a programmer abandoned the idea because the animation would be too difficult to pull off.[citation needed]

Yuna as a Trainer.

Rikku as a Trainer.

Paine as a Trainer. 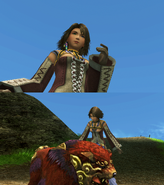 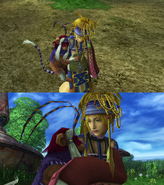 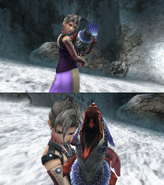