An abandoned storage area piled high with defunct freight trains that were used in Midgar's construction. One can almost hear the grinding of wheels and the screech of engines when the wind blows just right, and on occasion, even the laughter of children.

The Train Graveyard is a location inside the city of Midgar in Final Fantasy VII and Dirge of Cerberus -Final Fantasy VII-. Originally used during the construction of Midgar, this area has since become a junkyard for old and abandoned trains. It is filled with broken trains, creating a maze of rusted metal; an example of Shinra's neglect. Strong winds make the dilapidated carriages creak and groan, and odd high-pitched sounds echo over the area. The area is a dangerous lurking ground for monsters, especially of the supernatural variety. The Train Graveyard is located next to the Sector 7 Slums. This place is an unrevisitable location.

Cloud Strife, Tifa Lockhart and Aerith Gainsborough come to the Train Graveyard after being dropped down into Midgar's sewers by Don Corneo. They make their way through the graveyard on their way to save Sector 7 from the plate being dropped upon it. The party reaches Sector 7 just before the Turks blow up the pillar, causing the Sector 7 plate to collapse.

During the assault on Midgar by the World Regenesis Organization, Vincent Valentine lands in the slums' remains after dropping out of Cid's airship. Out of position, Vincent has to navigate his way through the rubble of disused train cars with Shelke's guidance. The graveyard holds many Deepground troops Vincent must combat, and some WRO soldiers who also ended up out of position. Eventually, Vincent exits the graveyard, and arrives at the front entrance of Shinra Building, which he proceeds to infiltrate.

This is the train graveyard all right—a real treasure trove of scrap.

The Train Graveyard is an abandoned junkyard full of rail tracks with abandoned trains and rubble, as well as barrels and abandoned storage containers. The Graveyard is comprised of two switchyards: the south Switchyard 2 is entered through a manhole from the Sewer System, while the north Switchyard 1 is adjacent to the freight storage just east of the Sector 7 Undercity Station.

The abandoned trains and rubble make it difficult to navigate the area. Therefore, one must climb over and through the trains to proceed through. Though most trains are immobile, a few have power remaining, allowing them to be moved to form bridges and create a path across.

In Final Fantasy VII Remake, the Train Graveyard has a large abandoned maintenance facility. This is a vast building that has more abandoned storage contains and trains on tracks. On its upper level are warehouses, rooms with trashed lockers and desks long-since abandoned, and a control room to oversee the facility. Also present are illuminated children's paintings across the walls, which only appear on approach.

The Train Graveyard can be visited early on as soon as the player arrives in Sector 7 Slums by heading east through the train station. However, it is visited during the main story in "Prevent the Fall of the Plate" by a party of Cloud, Aeris, and Tifa as they navigate their way through.

The Train Graveyard comprises only two screens: a north and a south screen. Before "Prevent the Fall of the Plate," a different setup of weaker enemies is fought, and after, the main enemies fought are the Cripshay, Deenglow, or the rare Eligor enemy in the north segment. Eligor can be stolen from to obtain the Striking Staff early for Aeris. On the north screen, the player must move the trains to create a bridge across from the Graveyard to the Sector 7 Slums.

The Train Graveyard is visited once again by a party of Cloud Strife, Aerith Gainsborough, and Tifa Lockhart during Chapter 11, "Haunted," as the three make their way to the Sector 7 Slums.

The location is greatly expanded over the original, with a new segment taking place in a large maintenance facility. Here, a new boss, Ghoul, is fought, blocking their way to leave the facility. Eligor returns at the end of the dungeon, but rather than being a regular encounter, is a full boss fight. Similarly, the player can steal the

Much like the original game, the location involves a mix of navigating through abandoned train carts while fighting cripshays and ghosts (with the added wererat enemies also fought), as well as in the north switchyard, reactivating immobile trains that have some power remaining in order to create a bridge across. However, unlike the original game, the Train Graveyard can only be visited during Chapter 11, and is not available earlier. Where the Train Graveyard originally had no dialogue scenes outside of the first when the three arrive, the Train Graveyard in Final Fantasy VII Remake has a number of cutscenes with character moments, as Aerith is haunted by visions of her childhood, and Tifa is frightened of ghosts.

When bringing the location back for Final Fantasy VII Remake, the developers wished for it to stand on its own. As such, they expanded the section to feel like a haunted house attraction, and made Eligor into a boss who foresees the disturbance in the lifestream following the Sector 7 plate collapse, and wishes to stop Cloud, Tifa, and Aerith from reaching the pillar in time.[1]

Will-o'-the-wisp-like apparitions appear within some of the areas, representing wandering souls. They resemble the pyreflies from Final Fantasy X in appearance and in story relevance. In Japanese folklore, Hitodama (人魂, hitodama?, lit. human soul) are balls of fire that float in the dark of the night, said to be souls of the dead that have separated from their bodies. 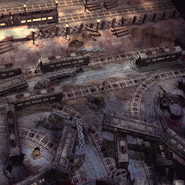 Tifa, Cloud, and Aerith preparing to move through the graveyard in Final Fantasy VII Remake.

Tifa, Cloud, and Aerith looking at train controls in Remake.

Aerith, Cloud, and Tifa exploring the area in Remake.

Supernatural doodles in the Remake.

Ghostly encounter in the Remake.

The ghost children disappear in the Remake.