Midgar
Trains in the Final Fantasy VII series of games are part of a train system used in Midgar as the city's public transportation system between the city sectors.

The system is run on Midgar Standard Time, with the system threaded throughout the city's upper plate and linked to a neglected Train Graveyard in the city's slums via a giant circular track that spirals up the city's central pillar. These rail systems are heavily monitored by the city's security system, with various security checkpoints along the routes used to automatically scan the ID cards of the passengers. An invalid ID results in the train being locked down car by car.

Another train can be seen at the Sector 1 Station, which links to the Sector 5 Slums with Sector 8. The train is called the MK93 II, however, a boy at the platform says that an even newer model, the MK100-90, is in the works.

The Player Turk is tasked with the protection of Professor Rayleigh from the forces of AVALANCHE while traveling onboard a train.

As the professor is carrying classified materials on SOLDIER, and so is a highly valuable target, a small unit of Shinra Military troops are also issued to ensure her protection; among them a young trooper called Cloud Strife.

The Midgar train system is used by Cloud and the members of the reformed AVALANCHE group to enter Sector 1 and bomb the Sector 1 Reactor and later used to escape the scene; using fake ID cards, they then returned to the Sector 7 Slums.

Trains appear as a mode of transport. The player boards them as part of the story. The trains are operated by Shinra and scan their passengers' ID cards; if someone fails an ID check, they are to be arrested. The trains run around the Corkscrew Tunnel from the slums to the topside of Midgar.

Accessed from the Sector 8 - Bridge after a cutscene, Cloud meets the rest of AVALANCHE in this car. It is dark with a blue tint, due to its lighting, and mostly metallic and filled with wiideb crates, and contains no passengers.

The second car, this contains a few passengers, until Barret scares most of them away. To Sector 7 - Sector 7 Slums Station. The car contains green benches along the side, and all the members of AVALANCHE can be interacted with here. At the front right, Jessie stands next to a routemap, which Cloud can access by speaking to her.

This train takes the party to Sector 4 - Tunnels. A timer occurs here during their escape, though if it finishes before the fifth car, the player will jump off early.

The first car accessed from Sector 7 - Sector 7 Slums Station. This contains multiple non-player characters, though the one at the back-right can offer an item when spoken to, which is 1 Phoenix Down. The timer here is fifteen seconds.

The second car is identical in appearance, though the camera angle is flipped. This time, the non-player character at the front-left must be spoken to in order to obtain the item here, which is 1 Hi-Potion. The timer here is fifteen seconds.

The third car is viewed from a completely different top-down camera angle. This car features a gil thief named 'Suri' who robs exactly 100 gil from the player (if the player has less than 100 gil, nothing happens), who can be chased down and made to return their gil. The timer here is thirty seconds.

The fourth car is identical in appearance to the third, and features no non-player characters with items. The timer here is seventeen seconds.

The fifth car is viewed from a similar buy slightly lower angle to the first. This is the final car, and the party always gets off here. The passengers here are all Shinra soldiers.

The Coal Train is drastically different from the train in Midgar, as it is not used as commercial transport, but instead to move Materia around, and not running on Mako energy, the Coal Train

Each sector in Midgar has at least one train station, making a total of eight stations used by passengers to embark and disembark at various points in the city proper.

In the Midgar slums there exists at least one station, which is also linked to the Train Graveyard.

A train first appears briefly in the chapter "At the Hideout in the Slums", on the way from Sector 8 to Sector 7. Here, the only goal is to interact with AVALANCHE, particularly Jessie, to view the roadmap. Later, in "To the No. 5 Reactor" a train from Sector 7 to Sector 5 features, though a quest is involved in which Cloud and AVALANCHE must escape the train quickly, determining where in Sector 4 they arrive.

The Coal Train requires the player to prevent it crashing in order to unlock the Huge Materia.

The two Midgar trains can both have a slight effect on the hidden date mechanics.

When Jessie is talking to Cloud in the first Car of the train from Midgar, his answer affects the game's date mechanics:

On the second train to Sector 4, getting through the train without being caught by the security system affects the date mechanics in a following manner: (+5 Tifa, +5 Barret)

Built underneath Midgar, Deepground has a separate monorail system that ferries people through the underground city to various locations.

Train in Before Crisis. 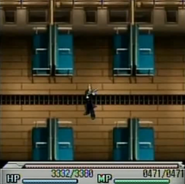