Trabia Garden is a location in Final Fantasy VIII, located on the icy northern continent of Trabia. Students (usually orphans) attend Garden, sometimes in hopes of transferring to Balamb Garden and becoming SeeDs. Selphie lived and trained here before she was transferred to Balamb Garden. Like the other Gardens, Trabia Garden is built on top of an ancient Centra structure. The Trabia Garden uniform is light gray and their Garden logo color is yellow.

At Trabia Garden, our motto is 'take care of oneself'.

Twelve years ago Cid Kramer and his wife, Edea Kramer, founded the Garden organization and constructed Balamb Garden on the island of Balamb. Afterward Galbadia Garden on the Galbadian continent was built, and finally Trabia Garden. Trabia is the smallest of the three Gardens, and the most remote, surrounded by snowy mountains and forests.

Selphie left Trabia to take the SeeD exam at Balamb Garden. Although she enjoys being a SeeD, she remains loyal to Trabia Garden, and speaks fondly of her time there. After the party fails to assassinate Sorceress Edea, she retaliates against Garden by launching a set of missiles at both Balamb and Trabia Gardens (Galbadia Garden is already under the sorceress's control at this point, so is not a target). Balamb escapes destruction by transforming into its mobile form and outrunning the attack, but Trabia is caught by surprise. By the time Balamb Garden arrives at Trabia, the party finds it in ruins.

The Garden is devastated, but does its best to comfort the survivors and pay their respects to those who were lost. Although some survivors seem to have lost hope, many students decide to rebuild the Garden, determined to refurbish it themselves. The Trabians start a charitable fund to help in the restoration process, although they refuse "pity donations".

The remote Trabia Garden is situated in the northern mountainous region of the Bika Snowfield in Trabia.

Trabia Garden is the smallest of the three Gardens, and thus its layout is more simplistic. The details of its construction are difficult to ascertain, however, given its interior is only shown after its devastation. It retains Garden's signature circular design. It is likely the building featured a two-story design with a headmaster's office on the third floor, but only the first floor accessible after its destruction.

The player cannot enter Trabia Garden until Balamb has been liberated.

None
The front gate is the main entrance to the Garden. The outer part of the gate remains intact following the missile attack, but it is no longer open, so visitors must climb over it to reach the inside of the Garden. After climbing the front gate, a ruined road leads to the courtyard.

None
The road past the front gate entrance leads to an open-air circular courtyard, which is likely the remains of the first-floor Lobby. A large fountain is the main feature of the area, and in front of it, a Thundaga draw point can be found. To the left of the courtyard, a garage can be found as well as the classroom, while to the right, the cemetery is found.

Selphie's Friend stands in the courtyard by the fountain. She if Squall has been looking after Selphie. She and Selphie seem to be good friends, as she holds the rare Triple Triad card of Selphie who is sitting by the fountain.

The August Issue of Weapons Monthly is found at the bottom of the screen in this area, just to the right.

None
The Cemetery is located east of the courtyard and contains headstones for deceased Garden members, including, one would presume, those who perished in the missile attack.

A Timber Maniacs magazine can be found at the top of the screen, along with a hidden Zombie, which never refills. During the player's first visit Selphie leaves the party and can be found mourning at the cemetery for her friends.

Here, a drowsy cadet who may have been rattled by the missile attack can be found. He blathers "That...Tonberry King!" and "Take this! GF summoning! BlahZzz......" and dreams of becoming a top-rank SeeD. One of the cadets says that he envies that he gets to be a top-rank SeeD, even if only in a dream. Another expresses disbelief that she asked him why he was so happy and he told her that he "went up 1 rank in his dream".

When at Trabia Garden the first time, Selphie will leave the party and visit various areas of her home Garden. She will appear at the garage with two kids who tell Selphie how they lost her teddy bear and she comforts them about it.

None
The classroom, located to the west of the courtyard and to the right from the garage, was once the center of learning at the Garden, but is now the organizational center. Home of the Garden's only working computer system, cadet supply teams use the classroom to inventory what is left of Garden resources and calculate the distribution of food and supply rations. The computer system is overseen by the Trabia Tech Squad, Port and Lank. A save point can also be found here.

None
The quad, located west of the classroom, is an open-air garden, and a place for students to relax. It also has a stage were students can watch performances or films, with the remains of a missile that has not been detonated. The student by the missile says there is no threat of an explosion, b but the remains is still dangerous as it could fall over. Currently, the stage is being rebuilt, and there appears to be an unexploded Galbadian missile lodged in its surface.

A hidden Aura, which never refills, can be found on the stage.

None
Extending off the quad is the basketball court, where students can play in their downtime. The party also experiences a significant event here. Local basketball teams include MogMog Moogle, Mach Chocobos and Moomba Samba.

Squall and Selphie reunite with their SeeD friends here after looking around the Garden ruins first. During the scene in the basketball court, Irvine will throw a ball. Depending on how many battles the party has won, the shot will be different.

Trabia Garden inhabitants play with Trabia region rules, where Plus and Random are the starting rules. Selphie card can be won from her friend sitting by the gargoyle statue.

The player can get various scenes within Trabia Garden with Selphie if they wander the premises before going to the basketball court. They can witness Selphie talking to her friend, mourning at the cemetery, and cheering up some kids on the fate her her teddy bear. A partially-working computer screen in the remainder of the classroom can be turned on. It either fails immediately, or shows Selphie's personal information, but she will quickly arrive to turn it off.

During the scene in the basketball court, Irvine will throw a ball. Depending on how many battles the party has won, the shot will be different. With fewer than 200 wins, the shot misses. Between 200–249 wins, the ball goes straight through, and at 250+ wins, the ball spins in the hoop before going through.

Talking to the sleeping student is the only hint to the existence of Tonberry King at the Centra Ruins.

Catching up with Selphie, who is talking to her friend when first entering Trabia Garden, is slightly different between some versions of the game. The game gives a dialogue option of either agreeing with or denying having supported Selphie while she has been away from Trabia. In some versions it does not matter which option is chosen because, either way, Squall's response is "whatever". In the Japanese version, and at least the original PC version, denying having been help for Selphie has both Selphie and her friend joking that Squall is harboring a secret crush. Agreeing to having supported Selphie has her laugh at the out-of-character response from Squall.

Trabia Garden is one of the few locations where moogles are mentioned in the name of a basketball team. The other places are Balamb Town where Selphie has an optional scene with a chef where she mentions her favorite food is "Ms Moogle's Cake", and a password option when rendezvousing with the Forest Owls in Timber "but the moogles are still around". The only moogle to appear in the game is MiniMog, a summon obtained from Chocobo World in the original, or through Angelo Search in the Remastered.

"Where I Belong", a version of "Ami", is the musical theme played within Trabia Garden.

Concept art of the outside wall.

Concept art of the walkway to the entrance.

Concept art of the central square.

Concept art of the cemetery.

Concept art of a destroyed stage. 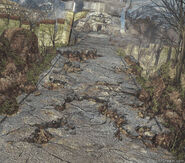 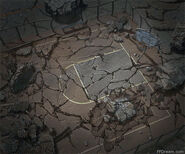 Selphie's profile on a computer terminal.

"Gift from the faeries".