The Tozus Tunnel is a small tunnel located below the gnome town of Tozus in Final Fantasy III. It can be accessed from Doctor Shelco's house. The party must remain in Mini status for their short journey through the tunnel. It is advisable to have a magic-based party while traveling through the Tozus Tunnel, due to the fact than being under Mini status affects the strength of physical attacks.

After healing Doctor Shelco with an Antidote at his house, he gives the Warriors of the Light access to the Tozus Tunnel, which they can use to leave the area of Tozus and reach the Vikings' Cove.

Tozus Tunnel's background music is the one from the town above, named "Tozus". 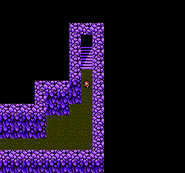