Welcome to Tozus, friends!
We're teeny and you're weeny!
You're the itsy to our bitsy!

Tozus is the hometown of the Gnomes in Final Fantasy III. Because it is a town made only for gnomes, the party can only enter when in the Mini status.

After escaping from Bahamut, the Warriors of the Light make their way into Tozus by using Desch's Mini spell. There, they communicate with the gnomes and meet Doctor Shelco, who has fallen ill. By healing him with an Antidote, they are able to make their way out of the village via the Tozus Tunnel.

Tozus is given its own theme, "Tozus". A vocal arrangement of this theme named "Have You Ever Seen Me?" was performed by Risa Ohki and included in the Final Fantasy: Love Will Grow album.

A race of gnomes known as the Lilliputians inhabits this village. These gnomes were ruled by a merciless dictator until a mighty giant known as Atlas freed them at long last from their oppression.

Tozus Village is mentioned as one of the wonders. 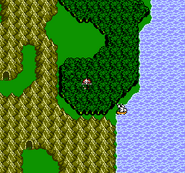 Entrance to Tozas on the World Map (NES). 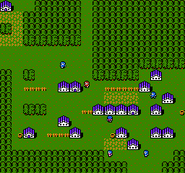