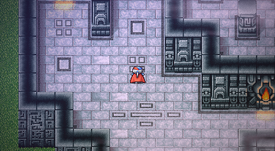 "Tower of the Magi" from Final Fantasy II

The theme for the Mysidian Tower of FFII. This is a mysterious, melancholy song and you can't help feeling uneasy when you hear its high-pitched vibrato.

"Tower of the Magi" (魔導士の塔, Madōushi no Tō?), also known as "Tower of Mages" or "Magician's Tower", is a background theme from Final Fantasy II. It was composed by Nobuo Uematsu.

"Tower of the Magi" is the background theme for the Mysidian Tower. It also plays at the Chamber of the Seal in the Soul of Rebirth present in the Game Boy Advance, PlayStation Portable and iOS versions. It also plays in several floors of the Arcane Labyrinth in the PSP and iOS releases.

"Tower of the Magi" was first distributed through the game's soundtrack of which it is the thirty-second track. It was subsequently rearranged for the original soundtrack of the Final Fantasy Origins version by Tsuyoshi Sekito. It is the fourteenth track of the second disc.

The original version appears in the music player. It is the sixth track of Memories of FFII purchased from Longwythe Rest Area for 100 gil.

"Tower of the Magi" is part of the Final Fantasy II Music Pack DLC distributed through the PlayStation Network. It is automatically selected for Arcade and Quick Battles featuring Firion, the Emperor or either of the Pandaemonium arenas.

"Tower of the Magi" is a bonus Field Music Sequence available as downloadable content.

"Tower of the Magi" reappears as a Field Music Sequence, available from the start.

"Tower of the Magi" is a FMS song that is available to the player by default.

"Tower of the Magi" was arranged by Kenji Ito and used as the background theme for the The Black Manor track. It was released in the game's original soundtrack as "Black House" and it is the twenty-first track of the album.

A piano arrangement of "Magician's Tower" by Hiroyuki Nakayama appears on this album.

[view · edit · purge]In Latin, Magi is plural of Magus, which means "wizard". Magi is also a term used since at least the 4th century BC to denote followers of Zoroaster, or rather, followers of what the Hellenistic world associated Zoroaster with, which was—in the main—the ability to read the stars, and manipulate the fate that the stars foretold.