Both Overworld and Underworld

A tower of this magnitude could not have been built by human hands.

The Tower of Babil, also known as the Tower of Bab-il or the Tower of Babel, is a location in Final Fantasy IV. It is a large tower that stretches from the Earth's Underworld to the Overworld. It is used by Golbez to summon the Giant of Babil from the Moon by collecting the Crystals from both worlds and bringing them to the tower.

Summoning the Giant dooms the world. Dr. Lugae and Rubicante, the Archfiend of Fire, have made the tower their headquarters. They operate a "Super Cannon," which they use to fight the dwarves of the Underworld. The tower's origin remains unknown, although due to its architecture, technology and connection to the Red Moon, it is likely of Lunarian creation.

Cecil, Kain, Rydia, Rosa, and Yang sneak into the lower half of the tower to retrieve the Crystals stolen by Golbez. They find Dr. Lugae and Rubicante preparing for war with the Overworld kingdom of Eblan. Rubicante teleports away, leaving Dr. Lugae in charge. Rydia comments on him, which he hears and spots the party. He and his robot, Barnabas, battle the party and are defeated. Getting angry at his defeat, Dr. Lugae battles Cecil's party again, this time transforming into a robotic form, but is again defeated. Before dying, Lugae declares that he has still won since Rubicante has taken all the Crystals to the surface and the dwarves will all be killed.

The party obtains the key to the room of the Super Cannon. They defeat the Goblin Captains manning the cannons, but they destroy the controls afterward. Yang kicks the party out of the room and presumably perishes in the following explosion. During the escape from the tower, Golbez tries to make the bridge leading to it collapse from afar, but Cecil's party is saved by Cid in the newly reinforced Enterprise.

After another series of events, Cecil and his party meet Edge and arrive at the upper half of the tower where they meet the King and Queen of Eblan turned into monsters by Lugae. Edge helps them return to their senses, and they are killed. Rubicante appears, and Edge loses control. Cecil and his friends defeat Rubicante and find the room with the Crystals, but fall into a pitfall, leading back underground where they find an abandoned Red Wings airship. Edge christens the airship the Falcon and the party uses it to escape the tower.

Once Golbez acquires all the Crystals, the Tower of Babil becomes shielded and is no longer accessible. Cecil, Rydia, Rosa, and Edge, along with the Lunarian Fusoya, arrive to deactivate the shield, but are too late. The Giant of Babil emerges, and must be destroyed. Afterward, the Tower of Babil cannot be entered at all.

After rescuing Rydia from the Sealed Cave, Cecil, Palom and Porom head to the Tower of Babil's underground area. The tower glows mysteriously and Rydia speaks only of traveling to it. Meanwhile, Edge explores the upper area on the surface, having seen the same glow. As Cecil and his comrades climb the tower, they battle elemental monsters that bestow Rydia her elemental Eidolons Ramuh, Shiva, Ifrit and Titan. Rydia disappears and three Android Soldiers attack Cecil and the twins, merging into the Deus Ex Machina. Edge saves them and they continue up the tower. At the top they find Rydia, but Edge recognizes her as a fake.

Now known as Rydia?, the impostor summons her elemental Eidolons to attack the group, followed by Bahamut. The real Rydia arrives and returns Bahamut to his senses, forcing the impostor to fight the group herself with Black Magic. Defeated, the impostor fades and reports to an unseen entity that the "Eidolon system" is complete.

Edge heads to the Tower of Babil where he meets up with the members of the Eblan Four one-by-one. They spot the Mysterious Girl in the same area where Rubicante was fought seventeen years ago. A voice warns Edge that he is no match against the Mysterious Girl and the voices are revealed to be Edge's late parents and Rubicante. The group confronts the Mysterious Girl who summons Ifrit to defeat them. Edge tries to flee, but the girl prevents them from escaping. He uses a smoke ability to flee to the Crystal Room. Remembering the trap door they fell into years ago, they use it to escape.

Returning to the Underworld, the group continues fleeing from the pursuing Ifrit. They enter the same hangar where they hijacked the Falcon, but find it empty. The girl catches up to them and Edge feigns defeat. Edge asks the girl about what happened to King Cecil and Baron. The girl reveals that Baron is gathering all of the world's Crystals under Cecil's orders. Edge comments that history is repeating itself before he and his group jump off the hangar and to the airship Rydia and Luca are using.

The tower's entrance is accessible only through Ninjutsu. Edge, the last addition to the party in Final Fantasy IV, warps them to start the climb, getting through the invisible barrier.

In this floor, Dr. Lugae is seeing Rubicante off, who is using the warper. The party encounters Dr. Lugae and Barnabas, whom they must fight. When they win, they will obtain Lugae's Key. Afterwards, the teleporter may be examined, and if prompted, will inform the player it is not working.

After obtaining Lugae's Key back in B6, the party must use it to open the locked door, which is the second exit in the map. It is the cannon control room. The party will encounter three Goblin Captains controlling the cannons, and when the party defeats them, they destroy the cannons' controls. Yang stays behind to save the dwarves, but fails and is assumed dead until he is found in the Sylph Cave.

It is the floor where the King and Queen of Eblan, Edge's lost parents, appear. They tell Edge to come with them "to hell", and the player must fight them as Lugae has turned them into chimeras. It is a scripted battle and the second phase is unwinnable.

As Edge mourns Rubicante appears before them. Edge falsely accuses him of experimenting with his parents, and the party must face him. After Rubicante is defeated, he will congratulate the party and compliments them, saying that Golbez will see them as worthy opponents. Edge's Seneschal, along with two ninjas, arrive, searching for Rubicante, but Edge tells them that the job is finished. Seneschal thanks the party and asks them to take care of Edge.

It is the room next to B5, and holds all of Earth's seven Crystals. As Cecil and the party approach to take them, they are caught in a trap and fall to a subterranean level of the tower. This is a large crystal room where the Crystals stolen by Golbez are kept in eight chambers, the top-most one of which is empty. While this makes sense, as Golbez lacks the final Crystal, the player never sees the empty chamber or the rest of the room beyond the entrance, as Cecil triggers a hidden pitfall and drops into the lower section of the tower upon entering. There is also a doorway at the back of the room leading to a short dead-end hallway, but the player normally can never reach or even see it.

In the 3D release of Final Fantasy IV, this room is smaller and has only one chamber where all seven Crystals are kept together. As the chamber lies at the back of the room where the door ought to be, and the map for the floor is completed without showing it, the hallway in the back of the floor is likely removed in this version.

It is an unrevisitable portion of the floor. Once the player has taken the west exit, the entire tower will be unrevisitable. The exit will lead to a room with a Red Wings airship. The party will use it to escape, and regroup back in the Dwarven Castle.

The background music inside the Tower of Babil is its eponymous theme.

The Tower of Babel is mentioned as one of the wonders. It bears the following description:

A legendary tower that extends to the heavens from deep below the earth. Also called the Tower of the Colossi, this mighty spire withstood the Cataclysm, and is a priceless remnant of ancient civilization.

The Tower of Babil was a massive dungeon, where players would face off against many hoards of monsters to ascend to the next level of the tower. For completing each set of encounters, players earned components for upgrading their Signet.

A remix of the tower's theme from Final Fantasy IV served as the dungeon's battle music.

The Tower of Babil.

Battle inside the Tower of Babil.

The Tower of Babil appears in the Field Music Sequence for the "Main Theme of FINAL FANTASY IV". The inside of the tower appears as the BMS for Battle With the Four Fiends.

The Tower of Babil returns in both Music Sequences.

With three Dark Crystals already in his possession, Golbez now aims to take the fourth and final Crystal. The party seizes this opportunity to make an assault on the Tower of Babil and retrieve the stolen Crystals.

To retrieve the Crystal, Edge joins Cecil's party as they make their way into the Overworld half of the Tower of Babil. 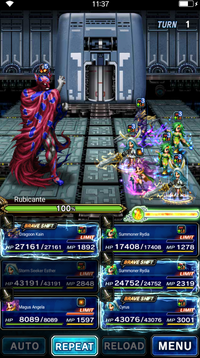 In the European Nintendo DS remake, Rubicante refers to the Crystals as being on the top floor of the tower, but when the party enters it through the Eblan Cave, they go down underground levels instead of going up. As such, when the pitfall opens under their feet, they only fall two floors at most.

Tower of Babil on the overworld world map (PSP).

Tower of Babil on the underworld world map (PSP).

The Tower of Babil on the overworld word map (iOS). 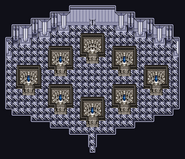 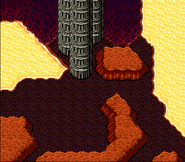 The base of the Tower of Babil in the Underworld (SNES).

The Tower of Babil in the Underworld (DS).

Akira Oguro artwork of the Tower of Babil (DS).

Tower of Babil in the Underworld, from the Final Fantasy IV official novelization.

Tower of Babil in a cutscene (PSP).

Rydia relearning a summon in the Tower of Babil in Final Fantasy IV -Interlude-.

The Tower of Babil is named for the Tower of Babel. [view · edit · purge]The Tower of Babel is from a story from the Book of Genesis in the Hebrew Scriptures/Old Testament/Torah, as well as other various ancient documents. The story tells of how early humanity was living in one city (violating the commandment to spread out and fill the Earth) and began construction on a great tower that would extend to the heavens so they could see God. However, God destroyed the tower and confused their language, forcing people to spread out among the Earth.