Touch Me is an enemy in Final Fantasy VII fought in the jungle Gongaga field areas, in the forests in the Gongaga Area on the world map, and in the third round of the Battle Square during the time Tiny Bronco is available. When fought in the Battle Square its stats are enhanced with double the regular HP and its Attack and Magic Attack are increased by 25%.

Touch Me can be a nuisance, as its attacks turn their targets into Frogs. Frog Jab both causes and removes the Frog status, alternating party members between the two forms. In general, it has weak attacks and low HP, so it can be easily killed. As always at this point in the game, Matra Magic is highly effective.

Touch Me uses the Enemy Skill Frog Song every two to four turns, which inflicts both Frog and Sleep with 100% accuracy barring resistance, but unlike Frog Jab, Touch Me will only use Frog Song on characters without the Frog status. There is also a one-in-five chance that it counters magic attacks with Frog Song.

If (At Least One Opponent doesn't have Frog Status) Then
{

Touch Mes appear as enemies in the Living Woods. Like all common enemies, they are defeated instantly when encountered.

Touch Me appears on a stamp for multiplayer mode. 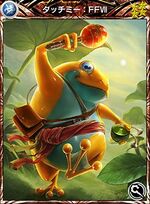 Frog Jab.
Add a photo to this gallery

Retrieved from "https://finalfantasy.fandom.com/wiki/Touch_Me?oldid=3277704"
Community content is available under CC-BY-SA unless otherwise noted.