Take your power, the light you hold in your heart, and use it well!

Topapa is a non-playable character from Final Fantasy III. The Elder of the town of Ur, he raised Luneth and Arc (all four Warriors of Light in the original Nintendo version). Even before the beginning of the game, Topapa knew that Luneth was destined to be a hero. When he finds out that Luneth has been set on a quest by the Wind Crystal, he wishes him luck on his journey.

Topapa can be sent letters through Mognet in the 3D version; doing so unlocks a sidequest to get the Onion Knight job.

In the Dawn of Souls and 20th Anniversary versions of the original Final Fantasy, Topapa is one of the automatic names the player can choose for the Black Mage job. 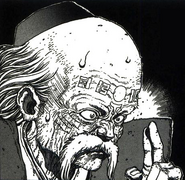 Due to his role as a father figure to the protagonists, his name may derive from "papa" meaning father. "To" may also derive from the Japanese word for one's father tō (父, とう?).