10
Tools is Edgar's special ability in Final Fantasy VI that allows him to use various machines to create various effects. Tools are found as weapons throughout the game, and as long as a tool exists in the player's inventory, it can be used against enemies. Tools can be sold, and re-obtained by the player later. There are eight tools in total. The Tools command may also be used by the optional character Gogo.

Getting all the Tools in the 2014 mobile/Steam version yields the Mech Mania achievement.

Edgar's other appearances throughout the series normally depict him using his Tools abilities. These typically resemble the same abilities from Final Fantasy VI in function and visuals, but are usually rebalanced for the relative game's combat system. In the Final Fantasy Trading Card Game, one of Edgar's cards can use the Drill ability. For two Lightning CP, Dulling Edgar and discarding an Edgar card, Drill lets the player choose a Forward and instantly Break it.

In Final Fantasy XIV, the Machinist job class has access to Auto Crossbow, Bioblaster, Drill, Air Anchor, and Chain Saw as weaponskills. These abilities are all fired from the same large device. 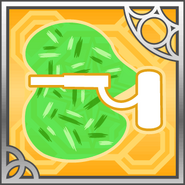 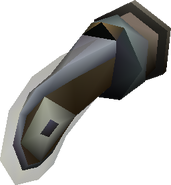 When the Chainsaw's Death attack is used, Edgar and Gogo don a hockey goalie's mask in similar fashion to Jason Voorhees from Friday the 13th. This changes it to an actual chainsaw, rather than the normal form which is more akin to a circular saw.

The Debilitator appears to be a headset and eyepiece, which is in line with its animation containing small representations of statistics similar to a Dragon Ball Scouter, including "LEVL" for "level." However, the animation places the eyepiece several pixels below the user's eye, covering the mouth area instead and pulling the headband below the top of the head.

In the original Japanese version of Final Fantasy VI, through a bug it was possible to equip any item as a helmet. The Drill was the most powerful item for this, reflected by actually becoming a helmet in Dissidia.

Edgar wielding the Chainsaw during its instant death attack.

Gogo wielding the Chainsaw during its instant death attack.