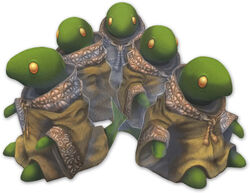 The Tonberries are loyal servants of Princess Mira in Final Fantasy Crystal Chronicles: My Life as a Darklord, that live to serve their dark mistress. Seemingly infinite in number, they help carry out her evil plans. One of the main Tonberries is a female by the name of Tonbetty, who provides key strategies during gameplay. They also have a tendency to prolong "s" sounds when speaking hinting of their reptilian qualities.