Located north of Deling City; the burial place of Dollet's last emperor. The tomb remains nameless due to an ancient belief that calling a dead king by his name brings bad luck. There are unconfirmed reports that a GF resides inside, as well as other monsters.

The name of the tomb derives from a superstition that bad luck befalls those who call a dead king by his name. The king was entombed to be forgotten in name, and later in memory.

The weapon of a Galbadia Garden student inscribed with an identification number lies at the maze's entrance. Squall and his party are tasked with locating it to be allowed entry to General Caraway's mansion in Deling City. As they arrive to the ruins, two Galbadia Garden students rush out of the tomb and flee in a panic. The party finds the weapon at the maze's entrance, but if they explore further, they will run into Sacred, one of the tomb's guardian spirits. He flees upon being defeated by the party, vowing to return to return with his big brother. The party completes the set of puzzles needed to lower the drawbridge to the center of the tomb.

As the party discovers the center of the tomb, Sacred and his elder brother, the diminutive Minotaur, fight the party. After the duo's defeat they join Squall's party as a Guardian Force, and the king's spirit is released, bestowing the player with the Minotaur card.

The tomb is located on the edge of the northern Gotland Peninsula on the Galbadian Continent.

The tomb is an ancient, stone tomb found in the middle of a jungle, surrounded by water. The tombs' interior and exterior are covered in moss and grass, and many of the rocks have been worn away. Inside, the walls of the tomb are marked with ancient patterns. The tomb is also well-engineered, with a gate able to control the flow of water.

The tomb is very difficult to navigate, as many of the screens in the room are identical in appearance, and backtracking will cause the viewpoint to change.

Inside, the Blobra, Armadodo, Buel, and Forbidden enemies can be fought.

None
The Tomb Entrance resembles that of an ancient courtyard, now overgrown with mold and grass. Many ruined structures occupy the area around the tomb, as well as small stone steps.

Sacred
The Statue Room is located to the very east on the map. It is a dark room which displays a statue in homage to the tomb's protector, Sacred. Examining the statue will lead to a boss battle with Sacred. There is also a hidden save point in this room.

Located in the very top room on the map, the watergate controls the amount of water flowing through the tomb's channels. This room has a small window to the outside, letting in more light. The Float spell available to be drawn from here is useful against the tomb's bosses.

The Water Wheel is located in the west-most room on the map. This wheel powers the movement of certain items within the tomb, such as bridges, but is dependent on the amount of water available for its rotation. The walls in this room do not have patterns, and there is an open door to a small area outside where the wheel is contained. The room also contains a hidden save point.

Brothers and their cards

Sacred and Minotaur
The main central chamber houses the coffin of Dollet's last emperor and is protected by magical forces. The chamber is reached using a wooden bridge across the water.

Most of the areas are tunnels, making the tomb appear straight-forward, but if the player decides to backtrack, the viewpoint will change, potentially confusing the player. In conjunction with the tomb's confusing layout, the player will drop a SeeD rank if they press the

to automatically leave the tomb at any time while they are inside.

The easiest way to complete the tomb is to always turn right from every screen where it is possible, thus going round the tomb in a counter-clockwise manner, visiting all the areas in the correct order. It is useful to equip Siren's Move-Find ability to find all the hidden draw and save points.

The Tomb of the Unknown King's theme is "Find Your Way", which is the standard dungeon music shared by other places in the game.

New orders from Headmaster Cid await Squall when the party reaches Galbadia Garden. Now they must find a way into General Caraway's mansion, which leads them to the Tomb of the Unknown King.

One of the two fleeing students yells, "Float!", hinting that casting Float will make the bosses easier to defeat. 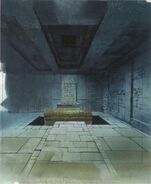 Early concept art of the tomb. 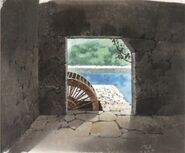 Concept art of the room with the water wheel.