Cid Pollendina: Oh, shut up and help me remodel the Tomb of Raithwall page!
Please expand this article into a full one. The following tasks need to be completed:

The Dynast-King's treasure. The Dawn Shard is but one of the riches that lie waiting in King Raithwall's tomb.

Tomb of Raithwall is a location in the land of Ivalice in Final Fantasy XII. It is the resting place of the Dynast King and his treasures. Tomb of Raithwall is located west of the Nam-Yensa Sandsea at the bottom of the Valley of Death, and must be conquered to obtain the Dawn Shard.

Adventurers seeking treasure or glory must travel by foot through the Sandsea and, upon arriving, are greeted by a Garuda. If the adventurer passes the gate guardian they must travel into the tomb by way of the waystone.

The path to the tomb is protected by a Demon Wall, and the rest of the tomb is filled with undead, bats and living statuary. In the final chamber Belias, the Gigas protects the Dawn Shard, one of the treasures of the Dynast King.

West of the Jagd Yensa, deep in the Valley of the Dead, lies the tomb of Dynast-King Raithwall, a titanic stone structure built during the age of the Galtean Alliance to celebrate his subjugation of the lands bordering the Naldoan Sea. Inside can be found many technologies and architectural marvels beyond the ken of modern man. In addition to Raithwall's crypt, the tomb contains priceless royal treasure, and only those with proof of direct lineage are suffered within. Intruders are met with traps and guardians most terrible. Though the sky pirates know of the treasure's existence, none have succeeded in its theft as yet.

Raithwall the Dynast King was buried in the tomb his followers built for him in a mountain beyond the Nam-Yensa Sandsea. The area is one of the parts of Ivalice known as Jagd making air travel to the tomb impossible by regular means.

The party visits the Tomb on their quest to find the Dawn Shard to prove Ashe's lineage so she can assume Dalmasca's throne. She promises to take only the nethicite and let the sky pirate Balthier have the rest of King Raithwall's treasures. On their journey the party is joined by Vossler, Ashe and Basch's old comrade from the Resistance.

The party makes their way to the heart of the tomb and fights the Esper Belias only to discover Belias was the treasure. Balthier is unimpressed, having expected the treasure to be something financially measurable. Ashe finds the Dawn Shard and witnesses an apparition of her late husband, Rasler Heios Nabradia, but on their way out the party finds Vossler has betrayed them and they are captured by the Empire.

The manga version expands on the events. Ashe, Vaan and Penelo attempt to retrieve the Dawn Shard while the others fight Belias. Vaan wants to help the others, but Ashe claims finding the Dawn Shard takes priority. Vaan is unimpressed with Ashe's attitude toward power and her friends and abandons her to look for the Dawn Shard alone while he helps the others in battling Belias. Ashe retrieves the Dawn Shard and returns to protect Vaan from the Esper, and the group defeats Belias together. Belias's glyph marks itself on the back of Ashe's hand as a sign of its servitude to her. Ashe and Vaan see an apparition of Rasler, and Ashe thinks back to their marriage.

Tomb of Raithwall is located west of Jagd Yensa, past Nam-Yensa Sandsea, deep in the Valley of the Dead. Due to being located on a Jagd access by regular airship is not possible. 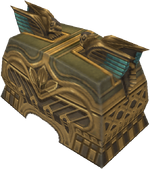 In the original version, after defeating the optional Demon Wall the player can gain access to an unlimited amount of Demonsbane swords. The wall where the Demon's Wall emerged contains a secret switch that opens a secret passage. In the middle of the passage there is a treasure chest with a 70% chance to spawn, and if the treasure spawns, it has a 45% chance to be gil, and if it is items, it is either the Demonsbane or a Holy Mote. If the Diamond Armlet is equipped the item treasure is Dark Matter. In the Zodiac version, this treasure is a Scathe Mote.

In the Zodiac version the player can find some magick spells (Dispel and Vanish) and the Shades of Black technick here, as well as various equipment, including the always useful Flame Staff for a Black Mage.

In the original version, the common item treasure for the other treasures in the tomb is a Knot of Rust. Other common item treasures are recovery items and gambits. With the Diamond Armlet the common item treasure is Knot of Rust and the rare item is Hi-Ether. In the southeast corner of the Southfall Passage there is a treasure that may have the Iron Hammer. In the northeast corner of the Northfall Passage the player may find the Longbow, and near the central device that must be operated to open a new passage, the player may find the Gillie Boots. The Cloister of Flame has four treasures that will always spawn, but will never spawn again once claimed. One of them is always Elixir, and one can be either an Elixir or Water Mote, and the others are common items.

In the original version, after having defeated both Demon Walls, the party can touch the blue crystal where the first demon emerged to reveal a secret area. In the Zodiac versions, this weapon can no longer be obtained this way. The treasure, which sometimes contains the Demonsbane sword, is at the bottom of either stairwell (they both lead to the same place). Because the chances of the sword spawning are slim, it is advised to save the game before entering. If the sword is not in the chest, one can restart and try again. Demonsbane will keep on re-spawning endlessly.

At this point it is one of the most powerful weapons, being beaten only by; the Burning Bow (rare drop from Dive Talons), Arcturus (Bazaar), Francisca (Bazaar), Zwill Crossblade (Bazaar), and Kagenui (Bazaar) but these weapons are harder to obtain before entering the tomb.

The chest has a 70% chance to spawn and if the chest spawns, it has a 27.5% chance to contain Demonsbane. The player cannot equip the Diamond Armlet. 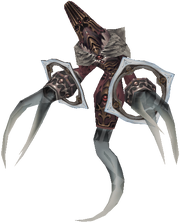 Upon entering Southfall Passage, the player must find a Lich and fight it, but not kill it. By lowering its HP to HP Critical it will be prompted to use Divide, spawning another Lich. There is a 20% chance for the spawned Lich to be the Cultsworn Lich. A naturally-occurring Lich will only use Divide one time, and a Lich produced from another Lich's Divide will not use Divide at all. Higher level characters may have difficulty in reducing a Lich's HP without killing it. 1000 Needles is a perfect Technick for this.

Barmuu spawns in the waystones area of the Royal Passage after the player chains at least 12 foes of the same type (it is recommended to chain the Seeker foes in Royal Passage), however, the player must not leave the area.

To find the Zombie Lord the player must have spoken to the "Huntmaster" in Phon Coast and defeated Thalassinon, which will trigger the start of the Rare Game quest. The Zombie Lord can then be found in the Northfall Passage part. It can appear at one of five locations throughout the area, but only if the game's clock is between 0 and 29 minutes. It can only be killed once.

Dyce is found at the entrance to the Tomb of Raithwall. After the party has progressed past this point, he will no longer be there.

"The Tomb of Raithwall" from Final Fantasy XII

The background music for the Tomb of Raithwall is the eponymous track "The Tomb of Raithwall" (レイスウォール王の墓, Reisuwōru Ou No Haka?). The theme that plays outside in the Valley of Death is "Moment's Rest" (一瞬の休息, Isshun No Kyuusoku?).

The map is found in the Royal Passage near the three way stones.

The appearance of the tomb may be based on the real world Kailasa Temple, Ellora.

Tomb of Raithwall on the world map.

The entrance to the Tomb of Raithwall.

The party within the Tomb of Raithwall.

The party within the Tomb of Raithwall. 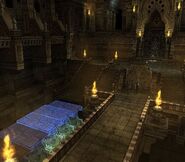 Path opened by a hidden switch.