"A grave-looking fiend from the Farplane that attacks with various status ailments. The battle can turn especially ugly if it inflicts Confuse on the entire party."

Tomb is a decently tough enemy, as it can inflict a myriad of status effects to the party. Its Stone Breath, which can inflict Petrify on the entire party, can lead to a Game Over if the party is not protected.

It is recommended to have status-resistant equipment and abilities as well as the ability to use Ice-elemental attacks, such as Blizzara or Ice Brand. Holy and Excalibur work just as well.

Tomb is available for capture after the Jahi fiend tale ending is seen. It has learned Attack, Stone Breath, and Ailment Def. but can learn Flare and Total Limit Break from a powerful enemy such as Humbaba in the Fiend Arena. 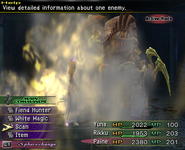