A small axe widely used for both warfare and everyday chores, including hunting and chopping lumber. While it has slightly lower Accuracy and Critical Rate than other weapons, it can easily deliver a heavy blow from its weighty head.

Tomahawk (トマホーク, Tomahōku?), also known as Axe, is a recurring weapon in the Final Fantasy series. It is generally a low-ranked axe that provides decent attack power.

The Tomahawk is a low-ranked axe that provides +50 Attack, 30% Accuracy, +5 Strength, and ignores Row. It can be equipped by Cecil, Cid, Kain, Luca, Golbez, and Gekkou. It can be forged at Kokkol's Forge with +4 Kokkol Ore and a Battle Axe during Rydia's chapter.

Tomahawk is an axe that provides 23 damage and 340 Delay. It deals 4.06 damage per second and accumulates 88 TP per hit. It can be equipped by level 25 Beastmaster and Ranger. It can be bought for 83 Sparks of Eminence from Isakoth in Bastok Markets (E-11), Rolandienne in Southern San d'Oria (G-10), Fhelm Jobeizat in Windurst Woods (J-10), and Eternal Flame in Western Adoulin (H-11).

The Axe is Kaeli's initial weapon when she joins the party, and is given to Benjamin after the battle with the Minotaur. It has 9 base power, an attack of 20 when wielded by Kaeli, and varies from 16.5 to 121.5 power when used by Benjamin, depending on his level. It is an axe-elemental weapon, and thus does extra damage against crab, tree, worm, and turtle-type enemies.

Tomhawk has an axe icon before its name. It has an attack power of 45 and it can be bought for 1700 G at Elan during the Future.

Tomahawk is an axe that provides 30 P.ATK, 85 Aim, and -3 Critical. It can be found in the Florem Gardens, or stolen from Black Axefighter.

The Tomahawk is a level 15 axe that provides +15 Attack, -2 Defense, and Wall Rush HP Damage +5%. It can be obtained from the shop by trading 3,700 gil, Axe, Protect Shard, and Transmogridust x4.

The Tomahawk is a level 1 axe that provides +17 Attack, -36 Bravery, and Wall Rush HP Damage +5%. It can be obtained from the shop by trading 9,300 gil, Axe, and Yaschas Massif Gravel.

Tomahawk is a hammer that can be equipped by Kamo. 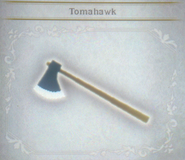 This gallery is incomplete and requires Final Fantasy Crystal Chronicles: My Life as a King added. You can help the Final Fantasy Wiki by uploading images.

[view · edit · purge]A tomahawk is a type of axe from North America, traditionally resembling a hatchet with a straight shaft.