Tokkul, also known as Tokkle, is a location in Final Fantasy III found at the southern end of the Floating Continent. Most residents will run away in fear if approached. The elder in the house on the north end of town explains that soldiers from Castle Argus recently attacked, so people have been on their guard.

There are no shops, inns, or wellsprings.

Before the visit of the Warriors of the Light to Tokkul, the town was attacked by the forces of the evil wizard Hein. As they arrive to the town after restoring the Fire Crystal, they are attacked and abducted by his soldiers and taken to his castle.

Note: Enemies are only encountered outside of town.

The background music that plays in Tokkul before the events at Hein's Castle is "The Djinn's Curse", and is replaced by "Return of the Warriors" after Hein is defeated. 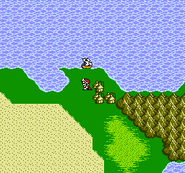 Tokkul on the World Map (NES).